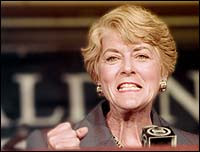 Evidently it wasn't bad enough that Geraldine Ferraro clumsily tried to play the race card a few weeks ago. She said then that the only reason Obama has been successful is because he is black. It was a ridiculous statement and resulted in her being tossed out of the Clinton campaign.
Now she has inserted a second foot in her big mouth. She has said she believes Barack Obama has run a "terribly sexist" campaign. She went on to say that she may not vote for him if he becomes the party's nominee. Does that mean she would prefer to have McCain as president?
I used to have a lot of respect for this lady, but she has now destroyed that. I'm sorry now that I voted for her when she ran for vice-president. I had no idea how petty and vindictive she could be. She can't really think the women of America would be better off with McCain as president.
To Clinton's credit, her campaign was quick to distance her from Ferraro's remark. And I don't think Ferraro was speaking for the campaign. I think she is still smarting from the outrage over her last remark, and was just trying to strike back.
But she is not now helping Clinton or herself. The only thing she is doing is destroying her reputation as a loyal Democrat.
Posted by Ted McLaughlin at 12:02 AM