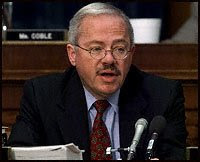 The Libertarians held their national convention this past weekend, and it looked for a while like Republicans might get lucky and not have the Libertarians nominate a candidate that would appeal to many in their disaffected base.
There were 14 candidates seeking the Libertarian nomination for president. The only one who has any real public name-identification is former right-wing Republican congressman from Georgia, Bob Barr. Many thought because he was a well-known ex-congressman, Barr would easily get the nomination. But it didn't work out that way.
The Libertarian rules says the contest goes as many ballots as necessary to give one candidate a majority of votes cast. With each round, the person with the least votes (and anybody with less than 5%) is dropped from the ballot.
After the fifth round of voting, it still looked like the Republicans might not have to worry about Bob Barr. The fifth round had Texas candidate Mary Ruwart in first place with 37%, Barr in second place with 36% and Wayne Allyn Root finishing last with 21%. It all came down to who Root's supporters would back in the sixth round.
That's when Root showed how badly he wanted on the national ticket in any capacity. He threw his support to Barr, and asked Barr's supporters to support him for the vice-presidential nomination. That did it. On the sixth ballot, Barr received 52% of the vote and became the nominee. Without Root's political opportunism, Barr might well have lost.
But Barr is now the nominee, and that has to have establishment Republicans worried. McCain is already having problems with the right-wing fundamentalist base of the Republican Party. Until yesterday, it looked like they might be forced to vote for McCain, even though they really don't like him. Now they have an alternative.
This will make it much harder for McCain to move toward the middle and try to appeal to independents. If he tries to do it, he could lose a big chunk of his base to right-winger Bob Barr. The Libertarians were hoping to pass the one million mark in votes in this election. With Barr's established right-wing credentials, they could do even better than that.
I don't know if they needed it or not, but the Democrats just got a little help for the November election.
Posted by Ted McLaughlin at 12:02 AM