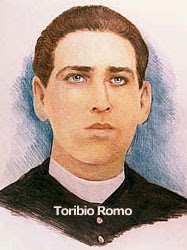 A new sanctuary movement has been started in San Antonio to help undocumented immigrants. They are Catholic faith-based activists who have organized to provide food, healthcare and places to stay for the immigrants.
Currently the group visits day laborers, giving them breakfast and a card. The card has a picture of Father Toribio Romo on one side and a phone number on the other. They can call the phone number and use the code word "Romo" to get help.
Toribio Romo was a Mexican priest who was killed in the 1920's and later canonized. Many of the undocumented immigrants pray to him during their dangerous crossing into this country.
The group members know they are flirting with the possibility of violating U.S. immigration laws, and many of them are willing to go to jail for their beliefs. They say their religious and moral tenets are more important than unjust laws. As Lee Thelien of Our Lady of Guadalupe Church says, "We're accomplices if we don't speak out against this injustice."
I admire these people. I am not a religious person, but I do respect the few christians brave enough to actually follow the teachings of their faith. Far too often in our modern world, religion is nothing more than a way to hurt and discriminate against those who are not liked.
People who are willing to put their freedom at stake to help the downtrodden deserve our respect.
Posted by Ted McLaughlin at 12:03 AM