Tarrant County Is Getting Greedy 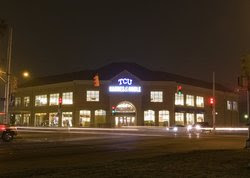 It looks like the Republican leadership is getting too greedy in Tarrant County. Now they want to tax an educational institution -- Texas Christian University. For them, it's not enough that the university provides hundreds of jobs for the local economy and brings thousands of students to Fort Worth. These students buy from many businesses and increase the sales tax revenue for the area.
No one can deny that the university is a big boon to the local economy, but it now looks like Tarrant County wants even more. Last January, the university opened a new bookstore that is run by Barnes and Noble. The Tarrant Appraisal District wants the university to pay property taxes on the new bookstore.
Now the tax district doesn't charge property taxes on the bookstores of other universities in Tarrant County -- Texas Wesleyan University and the University of Texas at Arlington. But they claim the new TCU bookstore caters to the general public, and not just to TCU students.
That is just ridiculous. No university bookstore anywhere will refuse to sell to the general public. I imagine they would all love to have even more business from the general public. Even though I graduated many years ago, I still like to stop in the university bookstore at my alma mater (Texas Wesleyan) whenever I am in Fort Worth.
It speaks well of TCU that the general public would shop at their bookstore. It shows the depth of support for the university among the general public. This is certainly no reason to punish the university with an onerous tax bill.
Who does the tax district think is going to have to pay that bill? It will be the students, of course. It's not bad enough that tuition and other costs keep rising, but now the county has added a tax burden for the students to pay. This is just wrong.
TCU owns the property and the bookstore. Barnes and Noble just run it for them. And the majority of the business the bookstore does is student business. The school says that 75% of the revenue for the bookstore comes from textbook sales. Add to this the other school items such as athletic gear, class rings, book bags and a lot of other items emblazoned with the school logo and colors, and the school thinks it is completing its mission -- to serve the students.
The Tarrant Appraisal District needs to reconsider their very unwise decision. In order to continue serving their students and the community-at-large, TCU needs to keep its costs to students down as low as possible. The tax district seems to be working against that goal.
Tarrant County government needs to stop and think. TCU is too great a benefit to Tarrant County to be treated this way.
Posted by Ted McLaughlin at 12:02 AM