Racism At The "Values Voter Summit" 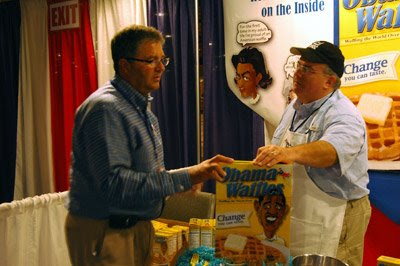 I want to thank the good folks at the excellent blog Mark of the Beast for the heads-up on this bit of right-wing sleaze. The Family Research Council just held their Values Voter Conference from September 12th thru the 14th in Washington, D.C. I know this will shock many of you (not!), but it looks like racism is alive and well among the "christian" right-wing.
One of the more popular booths at the conference was run by Bob DeMoss and Mark Whitlock. Both have been connected to Focus on the Family and the Family Research Council for years. These two "good 0le boys" from Tennessee were selling Obama Waffles in their booth.
They had their booth open for a day and a half of the three day conference, and sold 400 boxes of the waffles, before the Family Research Council realized they were getting some bad publicity from the racist booth and asked them to close it down.
DeMoss and Whitlock claimed their "free speech" was being curbed and claimed their product wasn't racist. DeMoss said, "I understand that it's not for everyone. But we don't have a racist bone in our bodies. This is humor, not hate." But the waffle box itself shows this to be an outrageous lie. The box contained:
- an image on the flap depicting Obama in a Muslim headdress with the copy "Point box toward Mecca for tastier waffles."
- a caricature of Rev. Jeremiah Wright as a missing person on the side of the box, with copy, "Popular sayings: 'God d*** America' and Made in the US of KKA."
- the recipe for "Barack Belgium Beauties" reads, "Environmentally conscious consumers should pay two ozone-offset carbon credits to Al Gore's GreenWorld fund."
- a caricature of Michelle Obama saying, "For the first time in my adult life I'm proud of an American waffle."
- an attempt at a rap song, "Barry's Bling Bling Waffle Ring recipe rap"
"Yo, B-rock here droppin' waffle knowledge
Spellin' it out, 'cause I graduated college
Some say I waffle so fast, Barry's causin' whiplash
Just doin' my part, made wafflin' a fine art
For a waffle wit style, like Chicago's Magnificent Mile
Spray whipped cream around the edge
Shake it first like Sister Sledge
Then say wit me, I can be as waffly as I wanna be!
(That goes out to my Ludacris posse)"
And in an attempt to offend everyone,
- a caricature of Obama in a sombrero promoting "Open Border Fiesta Waffles," saying, "The greatest danger of all is to allow walls to divide us. It's time we opened our borders and our wallets to all who desire a taste of freedom. So put out the welcome mat and enjoy this multicultural celebration." And, "While waiting for these zesty treats to invade your home, why not learn a foreign language? Recommended serving: 4 or more illegal aliens."
Are these really the values promoted by the "christian" right-wing? How could anyone get these kind of racist values from the teachings of Jesus?
Posted by Ted McLaughlin at 12:07 AM