Another Right-Wing Lie About Health Care 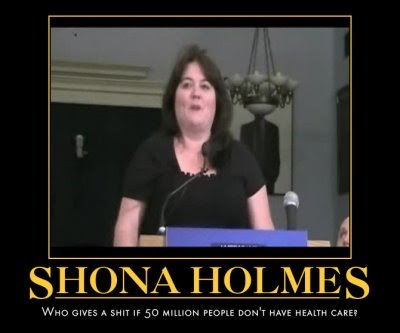 The other day on television, I saw an ad attacking the Canadian health care system and accusing President Obama of trying to institute a similar system in the United States. A woman named Shona Holmes says in the ad that she had a life-threatening brain tumor and was told by Canadian doctors that they could not do her surgery for six months. She goes on to tell us that she would have been dead by then.

She then tells us that she came to America (Mayo Clinic), where doctors operated immediately and saved her life. Could this possibly be true? This goes against everything I've heard from Canadians, who would never trade their system for ours (even the Canadian conservatives). By the way, not a single bill proposed in Congress has suggested we impose the Canadian system.

I decided to look into it. I went to the website of patientsunitednow.com, who paid for the TV ad. I learned there that this was no grassroots patients movement at all. This organization was created and funded by an ultra-right-wing group called the Americans for Prospeity Foundation. They created this "group" to try and trick Americans into thinking that patients nationwide were opposed to President Obama's health care reform.

But what about the claims of Shona Holmes? Well, we now learn that those claims were lies also. She did not have a brain tumor, and her life was not in danger. She had a cyst, which could have been removed after a six-month wait (if it was really that long a wait). It was starting to affect her eyesight because it was pressing on an optical nerve, but removing the cyst fixed that (and would have even if she had waited).

The people of Canada have seen Ms Holmes' lies, and they are very angry. They do not appreciate her slanderous statements about their health care system being spread all over stateside television.

Ms. Holmes has now created a huge medical bill for herself by coming stateside for the operation. She is now trying to sue the Canadian health care system to make them pay the bills. I doubt she'll be successful though. The free Canadian health care she was offered would have fixed her medical problem. It was her choice to go stateside for the operation, and she should have to pay for it (just like a resident of the United States would have to do).

It also turns out that if she had been a resident of the United States with private insurance, she would still have that huge medical bill to pay. That's because the cyst was caused by an "embryological remnant" -- in other words, she was born with it. Is there any doubt a private insurance company would have called it a "pre-existing condition" and cancelled her insurance?

As the health care reform slowly makes it's way through Congress, we are going to see a lot more of these kinds of ads. Don't accept them at face value. The right-wing don't feel any remorse for their many lies, as long as they get what they want. And what they want is to keep the current badly-broken system.
Posted by Ted McLaughlin at 12:04 AM