What IS Farouk Shami's Religion ? 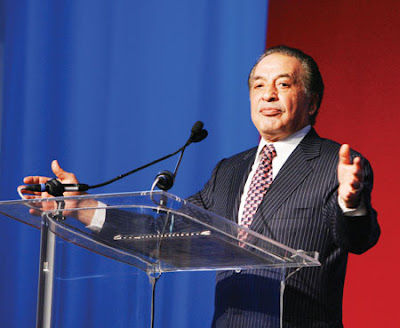 When Houston millionaire Farouk Shami (pictured) announced his candidacy for the Democratic nomination for governor of Texas, his campaign said Mr. Shami was currently a Quaker (although he was raised as a muslim). Many of us bloggers took the campaign at it's word and jumped to defend Mr. Shami when another candidate accused him of being a muslim. At the time, it seemed like a scurrilous and untrue attempt to smear Shami.
Now I don't know what the truth of the matter is. A couple of days ago, the Shami campaign said campaign aides were wrong when they said Mr. Shami was a Quaker. They did not say what his religion was -- just that he was a "very spiritual person". Naturally this created some consternation among media outlets and bloggers. Why were we told an untruth? Is Mr. Shami trying to hide the fact that he's a muslim -- a fact that could have a large impact on his candidacy?
Now the Shami campaign has released a new statement. Media director Kelly Love Johnson sent out the following statement from campaign director Vince Leibowitz:

"With record unemployment rates, skyrocketing utility rates, and all of the other problems facing Texans today, it is beyond our comprehension why the media refuses to focus on actual issues and substantive public policy and instead chooses to swamp an entire media cycle with garbage process stories about whether Farouk Shami practices the religion of Mohammad or William Penn."

"Instead of focusing on what matters to everyday Texans, such as where their next mortgage payment will come from or if their jobs are about to be outsourced to China or Mexico, the media has made its primary concern something that is intensely private to most individuals, including Farouk Shami," he continued. "More bandwith and newsprint has been expended on this issue than has been dedicated to any of Farouk Shami's policy ideas since he got into the race."

"The economy, job creation, transportation, and the environment are all more worthy issues for discourse. The media, however, shies away from discussing real issues because 'gotcha' journalism' is more amusing. Ask the 800,000 unemployed Texans which is more important: how many times a day Farouk Shami prays or whether we can lift our economy out of the toilet it has been flushed following nearly two decades of iron-fisted, pro-special interest, Republican rule."

Farouk Shami is an unconventional candidate with new and innovative ideas. The media ignores that in favor of trying to parse statements about his religion. The media has done a disservice to Texas Democrats. Texas Democrats want a meaningful dialogue in this primary, not an election cycle driven by process stories on subjects with no bearing on how Farouk Shami will run the state as Governor. It is enough to make one wonder if Shami's religious beliefs are the issue here, or if there is something darker and racially motivated underlying the recent media attention to whether or not our candidate is a Christian. "This is the same line of questions and attack people made against Barack Obama during the election for President," says Leibowitz. "Apparently, if you're not lily white, some people will require you to pass a religious test in order to run for office in this country."

The campaign would like everyone to believe that Mr. Shami's religion is of no consequence in his campaign for the governorship. Normally, I would agree with that. It should not matter whether Mr. Shami is a christian, muslim, hindu, buddhist or has no religion at all. But this matter was not initially brought up by the media.
It was Shami's own campaign staff that told everyone he was a Quaker, and then backtracked and said he was not. By releasing untruthful information, it is Shami's campaign itself that has made this an issue in the campaign. By refusing now to tell the complete truth, they are now fueling the fires of controversy and making it look like the candidate is trying to hide something.
This is not a matter that is going to go away now. Voters are going to wonder how many other things the candidate is trying to hide from them. There is only one way to put the matter to rest, and that is complete honesty by the candidate himself. He needs to come out and tell the citizens of Texas just what his religion (or lack thereof) really is.
The Shami campaign started this fire, and it is up to them to extinguish it.
Posted by Ted McLaughlin at 12:06 AM