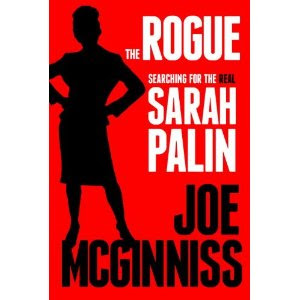 If there's anything that Sarah Palin doesn't want the public to know about, it's what a despicable person she really is. So she really was upset when the book by Joe McGinniss was released by Crown Publishing. The book, The Rogue: Searching for the Real Sarah Palin, lays out the truth about what Palin is like, warts and all.

Evidently Palin thought she could bully the publishers of McGinniss's book, and get it pulled off the shelves. She turned her attorney, John Tiemessen, loose to threaten them with a lawsuit. Tiemessen sent Crown Publishing Group a letter threatening to sue them if they continued selling the book, saying the book contained "lies and rumors" and "amounted to the wishful fantasies of disturbed individuals".

But Crown Publishing, a division of publishing giant Random House, doesn't scare too easily. Crown spokesman Stuart Applebaum said the reporting in the book is "solid, reliable, and well-substantiated", and the company will stand behind McGinniss and his book.

The crazy thing about all of this is that the book wasn't flying off the shelves. It hasn't cracked the non-fiction top twenty on the New York Times best-seller list, and when I checked the Amazon top 100 earlier today it was number 78 on that list. But now that Palin has tried to bully the publisher I expect sales will pick up. People will want to know what's in the book that has her so upset.  And that may already be starting to happen. When I re-checked the Amazon list a few minutes ago, the book had moved up to number 76.

Palin is not going to sue because: 1) The publisher would love that since book sales would go through the roof. 2) The publishers have their ducks all in a row and the author can back up his claims. 3) Palin is a bully, and bullies never take on people willing to fight back.

If she's smart (which is very doubtful), she'll just shut up about the book. All she's doing right now is selling more of the books. I can't believe she doesn't realize that.
Posted by Ted McLaughlin at 12:02 AM