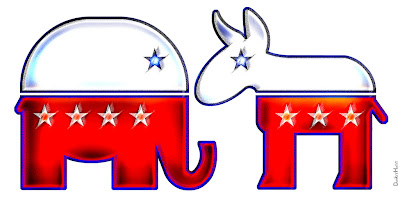 (The above illustrations are by DonkeyHotey at Flickriver.)

I thought Wall Street Willie (Willard Mitt Romney) already had as much trouble as he could handle these days. After all, as we've witnessed in the last couple of days he has trouble trying to draw a crowd in the state where he was born and raised. His handlers got the use of the stadium where the Detroit Lions play, and when Romney showed up to speak the stadium looked like a ghost twon. They had to bus in some school children just to make it look like anyone wanted to hear what he had to say.

Now there is a movement, being pushed by Markos over at Daily Kos, to have Democrats vote in the Michigan primary for Wall Street Willie's opponent -- Rick Santorum. This is possible because Michigan is one of those states with an open primary. Anyone (Republican, Independent, Democrat) can vote in the Republican primary on February 28th. And there would be no punishment from the Democratic Party for any of their members voting in that primary. Even Democrats who vote in the Republican primary can still attend the coming Democratic caucuses (and even become delegates to the state or national conventions).

Now no one believes there will be a massive turnout of Democrats to vote in the Republican primary. Even the organizers of the movement think there will only be a couple of thousand Democrats able to hold their noses shut long enough to vote for the odious Santorum. But that might be enough to make a difference. Polls in the last few days in Michigan have been split, with some favoring Romney and others favoring Santorum. But all of them show the lead to be within the margin of error -- meaning it is a very close race. It is not out of the realm of possibility that a couple of thousand Democrats voting as a bloc could tip the scales in Santorum's favor.

Personally, I think the whole thing is unnecessary. Evidently Markos and others still believe Romney might be a more formidable candidate against President Obama than any of the other three Republican hopefuls. I believed that also about 6 to 8 months ago. Now I don't think so. Romney has been damaged beyond repair in this campaign, and I doubt he could do any better against Obama than John McCain did in 2008. And I think the Republicans are starting to think the same thing. Republican strategist Ed Rollins said recently:

"Six months before this thing got going, every Republican I know was saying, 'We're gonna win, we're gonna beat Obama.' Now even those who've endorsed Romney say, "My God, what [an effing] mess."'

And even if Romney is able to squeak out a win in Michigan and Arizona next Tuesday, he has bigger problems facing him on Super Tuesday a week later. We have already seen polls that show Wall Street Willie is trailing badly in Ohio, Georgia, and Oklahoma. Now the first Tennessee poll has been released, and it shows Romney in trouble in that state as well. Unless something significant happens in the next 10 days, Romney could be facing an unmitigated disaster on Super Tuesday. Here are the Tennessee numbers: