Pakistan Is Not Our Friend 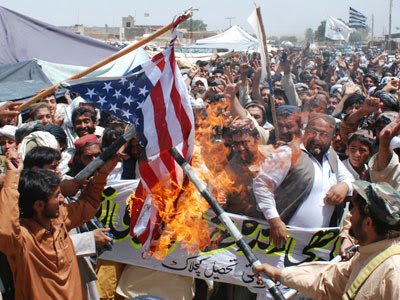 Consider these actions taken by Pakistan:
* They have allowed the Taliban (and their cohorts) to hide out in their country when things get too hot for them in Afghanistan. And they allow them to freely make cross-border excursions.
* That government has failed to rein in the elements of Pakistani Intelligence and Pakistani Military that assist the Taliban and al-Queda.
* They allowed Osama bin Laden to hide out in their country for years (within blocks of one of their military compounds). They knew bin Laden was a mass murderer and they knew he was in their country. They just didn't care.
* They have closed their border with Afghanistan to the American military (who needs to resupply American forces from Pakistan). They were charging the American government $250 per vehicle to conduct that resupply mission, but since the killing of bin Laden they are not allowing any American vehicles through. They say they now want $5,000 per vehicle.
* They convicted a doctor of treason for helping the Americans to find Osama bin Laden, and sentenced him to 33 years in prison.

That just doesn't sound like the way a friend should act to me. It is their country, and they have the right to do all of those things in their own country -- but those are not the actions of a friend -- especially one that receives huge amounts of financial help from the United States.

A senate committee has voted to cut off $33 million in aid to Pakistan -- a million dollars for each year the doctor who helped find bin Laden was sentenced to. And they have threatened to further cut aid to Pakistan if they don't open their border to U.S. trucks trying to resupply out soldiers in Afghanistan.

That may sound like a significant action, but it's not really. It would still leave over $1 billion in financial aid untouched -- $184 million for State Department operations, $50 million in counterinsurgency money, and $800 million in foreign aid. Why don't we cut the $800 million in foreign aid to nothing and refuse to give them counterinsurgency money (since that seems to be money thrown down a rat hole). Until they are ready to start acting like a friend, why should we give them any money at all?

Some of you may think this sounds rather strange coming from me, since I am vehemently opposed to the Afghan War. But while it is true that I am opposed to the war, and think we should immediately withdraw all our troops from Afghanistan -- I do not like Pakistan putting our soldiers in danger while they are in Afghanistan, and that's exactly what they are doing.

Pakistan is not our friend, and we should stop trying to act like they are.
Posted by Ted McLaughlin at 12:02 AM