This Republican Is Talking Sense 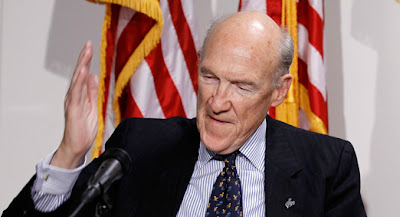 I haven't always been impressed by ex-Senator Alan Simpson. He goes a little to far down the cutting of the budget road for me (and I especially don't care for his ideas about cutting Social Security benefits -- which is just not needed). But Simpson's not a teabagger. He's an old-style Republican, who knows that neither party can govern without both parties compromising. He appeared on television last Sunday, and he had some harsh words for the party of "no" -- the teabaggers in Congress who think compromise is surrender. Here is what he said:

“For heaven’s sake, you have Grover Norquist wandering the earth in his white robes saying that if you raise taxes one penny, he’ll defeat you. He can’t murder you. He can’t burn your house. The only thing he can do to you, as an elected official, is defeat you for reelection. And if that means more to you than your country when we need patriots to come out in a situation when we’re in extremity, you shouldn’t even be in Congress.”