Would Going Off Fiscal Cliff Be So Bad ? 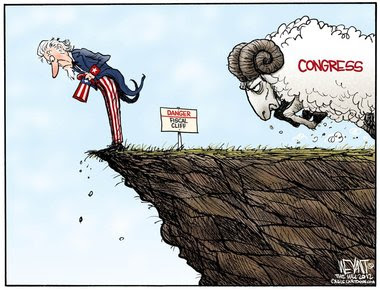 Well, Speaker Boehner's little gambit to try and put pressure on the president (and the Democrats) didn't work out. He couldn't even get members of his own party to go along with it, and his failure to get it passed has now possibly put his own position as Speaker in danger. You can bet he won't try anything else before he gets re-elected to that position, because another failure would probably insure he is not kept on as Speaker.

Boehner is now trying to put the onus on the Senate and the president, saying it is up to them to save the nation from going off the "fiscal cliff". He'd better not hold his breath for that though, since the Democrats know their position will only get better after the end of the year (and the GOP position will just get weaker). But while the Republican politicians have been screaming about what a disaster it would be to go over the "fiscal cliff", and too many media members seem to have bought into their rhetoric, I have to wonder if it would really be that bad. If nothing at all is done before the end of the year, this is what will happen:

* All of the Bush tax cuts will end. The Democrats will immediately propose that those cuts be re-instated for those making less than $250,000 a year -- and the Republicans will have to go along with it, or be labeled as the party that refused to cut taxes for most Americans. And the rich will go back to paying the same tax rates they did in the Clinton administration (which would still be one of the lowest rates in modern history).

* There would be across-the-board cuts in discretionary spending. This would not be great for those Americans hurting the most, but at least the cuts would be fair -- and would include cuts to the bloated military budget (which the Pentagon has said would not hurt the military at all). These cuts will take hold slowly, and if it looks like they will hurt the economy, there is time to restore some of it.

* Unemployment benefits from the federal government would cease for a couple of million people. This would probably hurt the economy more than the other cuts (since this is money that would be spent and circulated through the economy). The Democrats will try to reinstate those benefits -- and if the Republicans try to stop it, they are likely to pay for that in the next election.

* Social Security recipients would get their full cost-of-living raise, and it is likely that Democrats will protect them from any benefit cuts in the new year -- since the new Congress will have more liberal Democrats and fewer teabagger Republicans.

* The fear is that going off the "fiscal cliff" will put the nation back into a recession. But this is a fear of Wall Street and the giant corporations. Main Street, that is most Americans, still hasn't gotten out of the last recession and very little would change for them.

While it would be better to avoid the tax cuts for all but the richest people and avoid the cuts to discretionary spending (except for the defense budget, which needs to be cut), not getting anything done before the end of the year would not be a huge disaster. The tax cuts will be restored fairly quickly, and the Democrats will be in a stronger position in the new Congress to fight for ordinary Americans. And once this all goes into effect, there will be a greater impetus to reach an agreement on what to do about it -- because the GOP will then have their backs against the wall.
Posted by Ted McLaughlin at 12:06 AM