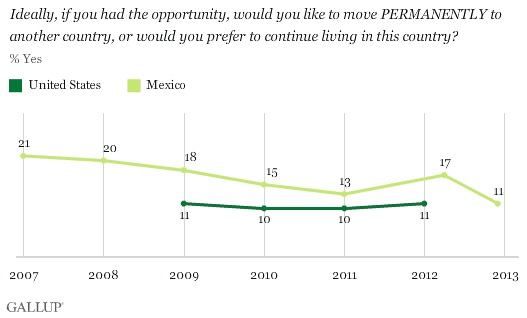 The last election showed the Republican Party has a serious problem in trying to get Hispanic votes. The GOP candidate for president (Mitt Romney) got less than 30% of the Hispanic vote -- which was even worse than the anemic percentage of that vote that McCain got in 2008. Some in the GOP may want to blame Romney, saying he was just a bad candidate. They believe they would do better with a different candidate.

But a recent Gallup Poll shows the fallacy of that kind of thinking. The poll, taken between January 2nd and December 30th of 2012 of 26,264 Hispanic voters nationwide (with a margin of error of only 1 point), shows that Republicans in general are just not very popular among Hispanics. Only 13% of Hispanics self-identify as Republicans, and when you add in those leaning toward the party the percentage rises only to 24% -- about half of Democrats and Democratic leaners (51%).

And there is little hope that the new generation of Hispanics will help the Republicans. The numbers of those who identify or lean to each party remains the same through all age groups. Here are those numbers:

The major reason why the Republicans don't seem to be able to make any inroads into the Hispanic vote is the way they demonize those peoples living south of the U.S. border. The GOP theme for the last few years (and which has not changed) is that there is a horde of millions of Mexicans wanting to enter this country illegally and take jobs away from U.S. citizens. They believe we must seal off the border.

There are several things wrong with that GOP myth. First, undocumented workers don't take jobs that American citizens want. They have always taken the difficult and dirty jobs with very little pay, that U.S. citizens show no interest in filling. Second, a fairly open border has always economically benefitted border towns and states on both sides of the border -- and completely closing the border hurts both countries economically.

Third, the net influx of undocumented immigrants is now at zero (or even less). In other words, there are as many (or more) immigrants leaving the U.S. as there are entering it. And as the chart above shows (taken from another recent Gallup Poll), the amount of Mexicans who want to leave their country and relocate to another country is 11%. Amazingly, that is the same percentage of U.S. citizens who would like to leave the United States and relocate permanently to another country.

Hispanics know all of these truths, and until the Republicans stop telling lies about undocumented immigrants and Mexico, they are not going to make any significant inroads into the Hispanic vote. Why should Hispanics ever vote for a party that demonizes their heritage and treats them as second-class citizens?

Some in the GOP think if they just pass some watered down immigration bill, then Hispanics will flock to their banner. I think that is ludicrous. It is going to take a lot more. They are going to have to start treating Hispanic citizens as equals, and undocumented immigrants as humans worthy of some respect. The problem the GOP has is that the teabaggers, who control the GOP in many states, simply are not ready to do that. Until they are ready to change their attitude, the GOP is going to have trouble wooing Hispanics.
Posted by Ted McLaughlin at 12:06 AM