What Happened To "Cost Effective" ? 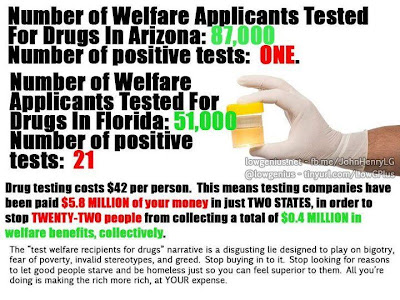 On both the state and national level, the Republicans have said many times that government must be "cost effective". In other words, the government should spend the least amount of money that will still get the job done. I don't think any Democrats would argue with that. No one in either party wants to spend money that doesn't have to be spent, but Democrats do want to spend what is necessary to help hurting Americans.

Unfortunately, the Republicans don't always practice what they preach. We have long known that the GOP has no respect for the poor. They consider them to be lazy bums (and probably drug users) who just don't want to work. Any reasonable person knows this is not true, but reason is not a Republican value.

Using their faulty logic, the Republicans decided they could save the government a lot of money by drug-testing people on welfare (or applying for it) and then denying those benefits to those who tested positive. The results of that stupid program have certainly not been cost effective to say the least. In Florida and Arizona, the two states crazy enough to actually try this program, the GOP has spent about $5.8 million on testing -- and found only 22 people who tested positive (thus saving far less than $1 million).

In other words, the program in those states has been a failure, and a huge waste of government money. And there is no reason to believe it would be any different in any other state (or on the national level). Most of the poor are decent people, who just need a little help to get out of a bad situation (and most who take advantage of government programs do so only for a limited time). The GOP vision of the poor is simply not true -- and it has caused them to waste a lot of money (money that could have been used to help people).

You know a policy is bad when the proponents are more willing to spend money to find reasons not to help people, than they are willing to just help. But that is today's GOP. They should be ashamed.
Posted by Ted McLaughlin at 12:04 AM