Corporate Profits Up, Taxes Down - No Jobs 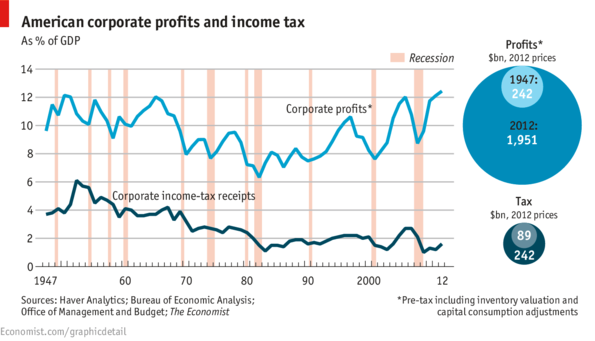 The Republicans have been telling us for years that the secret to a healthy economy is to enhance corporate profits and lower corporate taxes (the trickle-down theory). They said the corporations would then take that extra money and invest it -- creating millions of new jobs. To say that hasn't worked out is an understatement. It has been an abject failure.

As the chart above shows, corporate profits (as a percentage of GDP) are higher than they have ever been. The chart shows those profits since 1947, and they have never been higher. That same chart shows the corporate taxes paid (also as a percentage of GDP), and if you'll note, those taxes are as low as they've ever been since 1947. This brings up the question -- where are all the great new good-paying jobs that high corporate profits and low corporate taxes were supposed to bring?

The fact is that the corporations are not re-investing all that new money the trickle-down policy has funneled into their coffers, and not creating any new jobs to end the recession that's still affecting Main Street (although Wall Street left the recession behind long ago). In fact, the corporations are just sitting on that money -- a record amount of money totaling more than $1.73 trillion.

Why aren't the corporations creating jobs with that new money? Because jobs are not created by lowering taxes. The only thing that creates new jobs is increased demand for goods/services. When demand increases, businesses (both corporations and small businesses) will hire the workers necessary to meet that increased demand. But without any increased demand, it simply doesn't make sense to hire new workers -- because businesses already have enough workers to meet current demand.

Obviously, we need to increase demand if we want significant job creation. Corporations will happily spend some of the trillions they are sitting on to create new jobs to meet new demand, because that will increase their profits. But the Republican austerity (such as the sequester cuts) does not help create demand. It decreases demand (hurting job creation) because it takes money out of the economy, and means that the mass of Americans has less money to spend.

In short, the Republicans have been lying to us -- and too many Americans fell for their lies. Taxes have nothing at all to do with job creation (whether high or low taxes), and it never has. The only things "trickle-down" has accomplished is to fatten corporate banks accounts (and those of rich investors), stagnate worker wages, vastly increase the wealth and income gap between the rich and the rest of America (1% versus 99%), outsource millions of good jobs, and kick off a recession that cost millions of additional jobs. It has been a disaster.

But the Republicans don't care about the disastrous results their policies have had on most Americans. They only care about Wall Street, the giant corporations, and other rich Americans -- and those are the only people their policies have helped. It's time to get rid of enough congressional Republicans to allow the country to return to a sane economic policy -- a policy that takes into account what is good for the 99%.
Posted by Ted McLaughlin at 12:06 AM