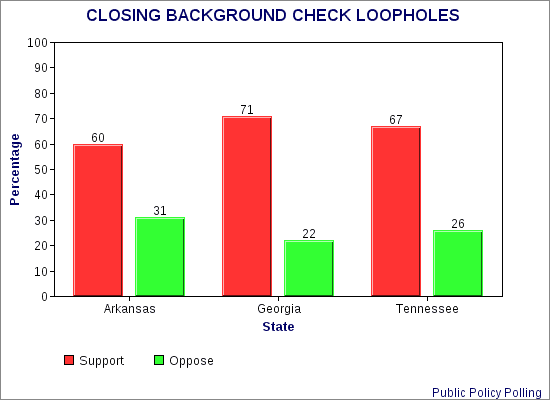 Recently the Congress had an opportunity to close the massive loopholes in the federal law requiring background checks for gun purchasers. And I'm not exaggerating when I call the loopholes "massive", since about 40% of all gun purchasers in this country are able to buy a gun without any kind of background check (through purchases at gun shows, from friends and acquaintances, and off the internet). Unfortunately, the Republicans (and a few red state Democrats) killed the bill in the Senate.

The thinking was that although voters nationwide supported the bill by a huge margin (about 90%), the voters in the red states did not -- and senators in those states would have a hard time getting re-elected if they voted for the bill to make background checks more effective. But there is now evidence that kind of thinking was faulty, and that voting for the bill would not have hurt senators of either party.

A new Public Policy Polling survey (conducted on May 22nd and 23rd) tested the waters in three Southern, and very red, states -- Arkansas, Georgia, and Tennessee. The survey questioned 522 Arkansas voters, 576 Georgia voters, and 500 Tennessee voters (giving a margin of error of 4.3 points in Arkansas, 4.1 points in Georgia, and 4.4 points in Tennessee). The found the support for closing the background checks had a strong majority in all three of those red states, easily eclipsing the margin of error -- 60% in Arkansas, 71% in Georgia, and 67% in Tennessee (see the chart above).

It seems obvious that the Democrats didn't win any new support by joining the GOP in killing the background checks bill. But did the Republicans cover themselves in a primary in their own party? Probably not. The polls had the breakdown of political demographics showing that the majority support pretty much cut across party lines (although the majority among Independents in Arkansas was within the margin of error). Here are the numbers for political groups in each state (with the first number being those who support closing the loopholes, and the number in parentheses being the those opposed):

While the majorities in red states may have been slightly smaller than in some other states (to close the background check loopholes), they are still significant majorities. It doesn't look like those of either party who voted against the bill have won themselves any new friends. In fact, they may lose some support because of it. But they kept the NRA leadership happy, and that was probably all they cared about.
Posted by Ted McLaughlin at 12:04 AM