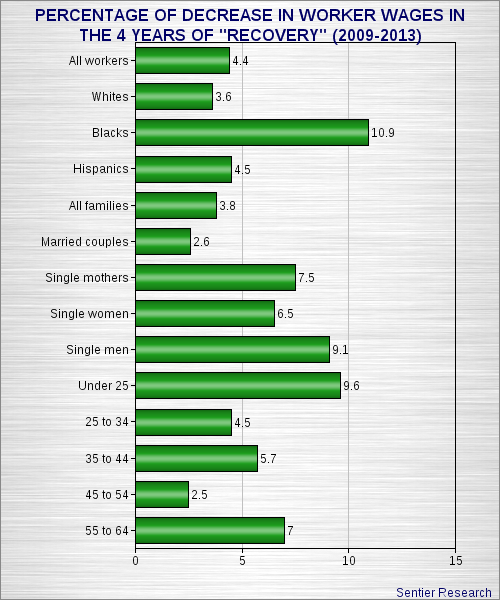 The economists tell us that the recession ended in 2009. And if you look at the incomes of the rich, the profits of corporations, and the rise of Wall Street stock values, that would seem to be true. All are at record levels.

But the "recovery" hasn't reached Main Street yet, where ordinary workers are still struggling to get by. Millions remain out of work, and even those lucky enough to have jobs aren't doing great. The chart above illustrates what has happened to workers in the last four years -- four years of "recovery". The chart shows what has happened to the median wage, both as a whole for all workers and for the different groups of workers.

Note that not only has the median wage for all workers dropped over the last four years (by 4.4%), but the wages for every single group of workers has also dropped. It has dropped more for some groups than other groups, but all groups have suffered a decrease in wages. Obviously, the "recovery" hasn't "trickled-down" to Main Street.

And with incomes of the rich increasing while worker wages are decreasing, it doesn't take a rocket scientist (or an economist) to see that the wealth and income gap between the rich and the rest of us has grown larger. It was already as large as the last hugely unequal period (the time immediately before the Great Depression), and now it has grown even larger. And it will continue to grow larger until we change our economic policies.

The Republicans want to make this situation even worse -- by cutting taxes for the rich and cutting government programs that help children, the poor, the unemployed, seniors, and low-wage workers. Many of them even want to eliminate the minimum wage. These policies, the same failed policies that got us into this mess in the first place, would just make the income and wealth gap much larger -- and set this economy up for another recession (and maybe even a depression).

We need to return to a saner and fairer economic policy. But this cannot be done until the Republicans are voted out of power. That's why the 2014 election is so important. If they aren't voted out of power in 2014, they will continue to obstruct any efforts to improve the economy -- and that will delay a real recovery by at least two years, maybe more.
Posted by Ted McLaughlin at 12:06 AM