The New Jersey "Bully" Is Exposed 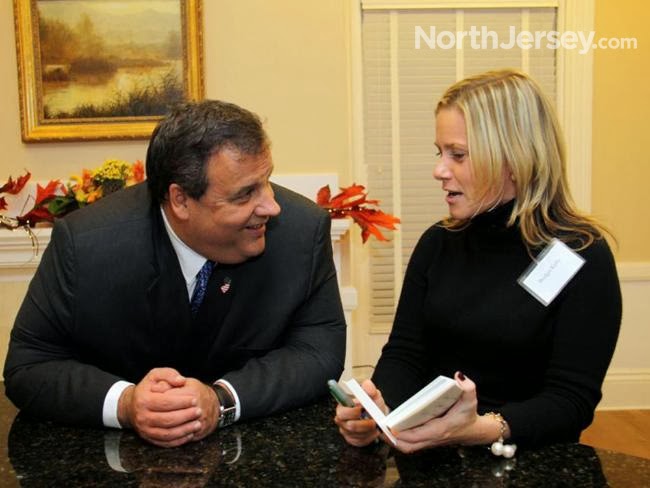 (The photo above showing New Jersey Governor Chris Christie with his aide, Bridget Anne Kelly, is from the website NorthJersey.com.)

The story about the Ft. Lee (New Jersey) lane closings leading to the George Washington Bridge has just got interesting. Those lane closings jammed up traffic and caused many commuters long delays. Among those experiencing delays were emergency vehicles -- with one woman who had a heart attack dying because her ambulance was delayed so long.

New Jersey Democrats immediately blamed Governor Chris Christie for the closures, but Christie played it off as just a "traffic survey" and said he had nothing to do with it. That was exposed almost immediately since New York officials said they were not aware of any survey (and the two states share port authority duties, including roads leading to those bridges). But while there were serious suspicions, there was no evidence that Christie had anything to do with the lane closures.

That has now changed. E-mails have been discovered from Christie top aide Bridget Anne Kelly, and these e-mails make it clear that she was involved in ordering the lane closures, and it was being done as a retaliation to the mayor of Ft. Lee (who had refused to support Christie in his re-election bid).

Yesterday, Christie called a press conference and tried to distance himself from the charges that he had ordered the retaliatory action himself. He blustered that he knew nothing about it, and said he had fired Ms. Kelly for lying to him about the affair. Frankly though, this smells like Kelly is being offered up as a token victim (an aide willing to fall on her sword to protect the governor she served). People who know Ms. Kelly say she is not the type of person who would act without approval from her boss (Christie).

Christie is the type of governor who has a top-down administration -- meaning he has a firm control over what his aides and employees do in his name. It is hard to believe he knew nothing about this political retaliation, and if he didn't, why didn't he find out what had happened before it was exposed by the press (since the story is now more than 3 months old)?

It seems that Christie has a reputation in New Jersey, and its not a good one. Instead of the jolly person he exhibits in public, he is known to be thin-skinned and vindictive and quick to retaliate against anyone who has the audacity to oppose him. State Senator Barbara Buono, who ran against him in 2012, says many in New Jersey (including some Democrats) fear the governor, and keep quiet out of a desire to keep their name off a Christie "enemies list". In short, he is a bully -- and now he has been publicly exposed as such.

The real question now is whether this will hurt him in a run for the presidency in 2016. That's still a long way off, but it looks like this story may have strong legs and will be in the news for quite a while -- and you can be sure any possible GOP opponents won't hesitate to remind primary voters of it. Moderate Republicans are not going to like supporting a tarnished candidate -- and his enemies, the teabaggers, while they might have liked his retaliating against a Democrat, won't like his apologizing to that same Democrat. But I suspect he has hurt himself most among Independents, who are already disgusted with most politicians -- and no party nominee can be elected president without grabbing a majority of the Independent vote.

It will be interesting to see where this story goes in the coming weeks. I have a feeling that much more will be exposed, and it won't be good for the bully in the governor's mansion.
Posted by Ted McLaughlin at 12:04 AM