Many More Americans Now See Russia As A Threat To U.S. 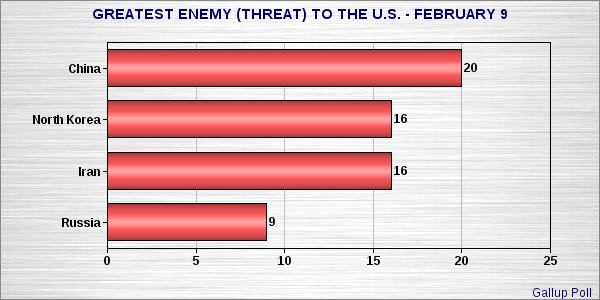 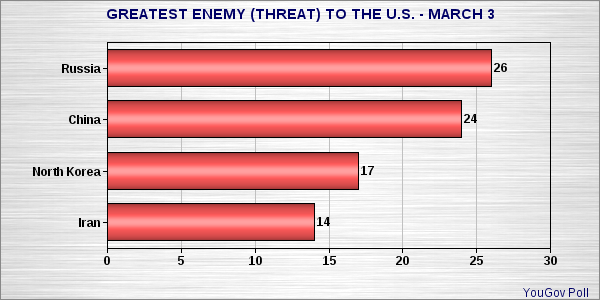 After the breakup of the Soviet Union (which was viewed as the number one threat to the United States), Russia has tried hard to rehabilitate its image in the world -- and they were pretty successful at that. This was illustrated by a Gallup Poll taken the first week of February -- about the time the Sochi Olympics were getting underway. That poll found that only 9% of Americans viewed Russia as a great threat to the United States -- far behind the 20% that viewed China as the greatest threat, and the 16% that thought North Korea or Iran was the greatest threat.

But a lot can change in just a month -- and it has changed. Russia took advantage of the problems in Ukraine, and invaded and occupied the Crimea (a province of Ukraine). It is now starting to look like Russia has returned to the aggressive expansionist policy of the USSR, and plan on keeping the Crimea. And that one action has changed the minds of many Americans on how big a threat Russia poses to the United States.

A new survey was taken in the first week of March -- this time by the YouGov Poll. Russia is no longer viewed as only the fourth greatest threat to the U.S. with only 9%. It has now jumped into first place as the greatest threat with 26%. With the aggressive takeover of the Crimea, Russia has seriously damaged the reputation it worked so hard to establish -- as a peaceful nation that wanted to assume a leadership role among developed nations.

The Gallup  Poll was done between February 6th and 9th of a nationwide sample of 1,023 adults, and had a margin of error of 4 points.

The YouGov Poll was done between March 1st and 3rd of a nationwide sample of 1,000 adults, and has a margin of error of 3.9 points.
Posted by Ted McLaughlin at 12:02 AM