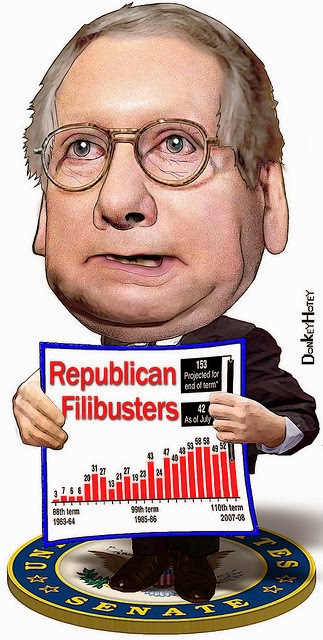 Republican officials in Washington don't mind Wall Street bankers, hedge fund managers, and CEOs making millions of dollars, and have no problem with corporate executives receiving huge bonuses (even when their company loses money). They think that their own salary of $174,000 a year (nearly four times the national median wage) is too low, and happily accept regular raises. But they don't think ordinary hard-working Americans with a full-time job should be paid a livable wage -- and they showed that again this week.

They have been filibustering a bill introduced in the Senate that would raise the minimum wage from $7.25 an hour to $10.10 an hour. On Wednesday the Senate voted on whether to invoke cloture (stop the filibuster) and bring the bill to the Senate floor for debate and a vote -- but the Republicans stood solidly against raising the minimum wage, and defeated the cloture motion.

And that's just what Reid should do -- bring it back up for another vote, and do that as many times as possible before the November election. Polls show a significant majority of the American people  are in favor of raising the minimum wage to at least $10 an hour (even in the Republican-controlled red states) -- with a recent Bloomberg Poll showing support for raising the minimum wage was 69% among the general public.

The Democrats need to beat this drum loudly, and make sure every hard-working American understands it is the Republicans that are keeping the minimum wage so low. Some, perhaps even most, Republican officials would like to even eliminate the minimum wage altogether -- and let employers pay less than the current $7.25 an hour.

They act like $10.10 an hour is some kind of fantastically large wage. But the truth is that a full-time worker making $10.10 an hour will just be making a yearly salary of about $21,000 (less than half of the national median wage). It will just barely lift a person out of poverty.

One Republican, Sen. Susan Collins of Maine, thinks she is being the "voice of reason" by calling for a compromise -- raising the minimum wage to somewhere between $8.00 and $9.00 an hour. But that is not reasonable at all, since it would still leave hard-working full-time employees making a poverty wage. The $10.10 an hour figure wasn't pulled out of thin air. It is the minimum salary that would lift many Americans out of poverty (and take them off government rolls). Sen. Tom Harkin of Iowa put it well when he said:

"We will not compromise on $10.10. That just gets us above the poverty level. Anyone who wants to go below that is saying that a hard-working American who works full-time all year long still will live in poverty. It's time to get beyond that."

The $10.10 an hour minimum wage is reasonable, and it should be instituted as soon as possible. And as long as the Republicans continue to keep that from happening, they should be brought to account for that -- and voted out of office. No hard-working full-time employee should be paid a poverty wage.

(The caricature above of Minority Leader Mitch McConnell is by DonkeyHotey.)
Posted by Ted McLaughlin at 12:04 AM