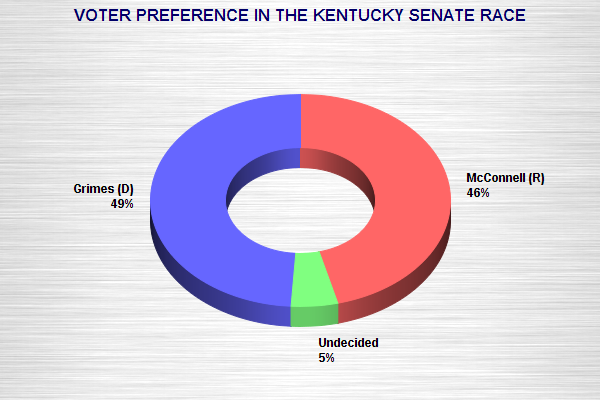 The chart above shows the results of the latest Magellan Strategies Poll on voter preference for the Kentucky Senate race. The survey was conducted on June 4th and 5th of 808 likely general election voters in Kentucky, and has a margin of error of 3.45 points.

The poll shows Grimes with a three point lead (49% to 46%), but that is within the poll's margin of error. That means the race is still very close, and could be won by either candidate -- which is just how the race has stood for months now. Even though McConnell is the current Minority Leader in the U.S. Senate, he has been unable to shake his Democratic opponent.

This is one race that could go down to the wire in November -- and unless something significant happens before then, it could actually be won by the Democrats (which would kill any chance the GOP had of taking over the Senate).
Posted by Ted McLaughlin at 12:04 AM