Are We Winning The War On Terrorism ? 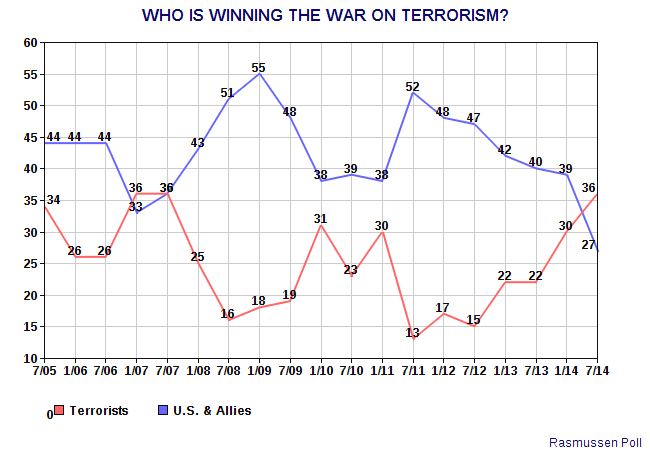 I believe the question regarding whether we (and our allies) are winning the "war on terrorism" is a valid question to ask. And this chart (made from Rasmussen Polls taken over the last nine years) shows that the American public has had a varying view on that. Currently the attitude that we are winning has been dropping, and for the first time in seven years, more people think the terrorists are winning than think we are winning (with the last time being near the end of the Bush administration, as people started to realize what a mistake invading Afghanistan and Iraq had been).

We have had ground troops in Afghanistan since 2001, but the terrorists are far from being defeated in that country. And even though we have withdrawn most of our troops from Iraq, recent events have shown that we did not defeat terrorists in that country either.

This brings up an even more important question -- if we are not winning the war on terrorism (and we aren't), why aren't we winning it? Don't we have the strongest, best trained, and best equipped military in the world? I believe we do, but the problem is that we refuse to learn from history. Our military is terrific at conventional warfare, and we can easily use it to topple the government of another country (like we quickly dispensed with the governments of Iraq, and Afghanistan). Unfortunately, terrorists (i.e. guerrillas, resistance fighters, etc.) don't fight a conventional war, and toppling a government won't get rid of them.

There is a more effective way to deal with the problem of terrorism. It requires a two-pronged effort, using both diplomacy and law enforcement. The diplomacy can encourage the cooperation of other governments and limit the safe places the terrorists have in which to live and train. The law enforcement can then track down the terrorists and either capture or eliminate them (without harming innocent civilians). It's not an easy task, but there is no easy way to deal with terrorism -- and it's the only effective way to deal with the problem.

We are not winning the war on terrorism. But we could, if we learn from history and restrain our urge to use our military to solve all our problems.
Posted by Ted McLaughlin at 12:08 AM