Majority Says A 3rd Party Is Needed (But Don't Mean It) 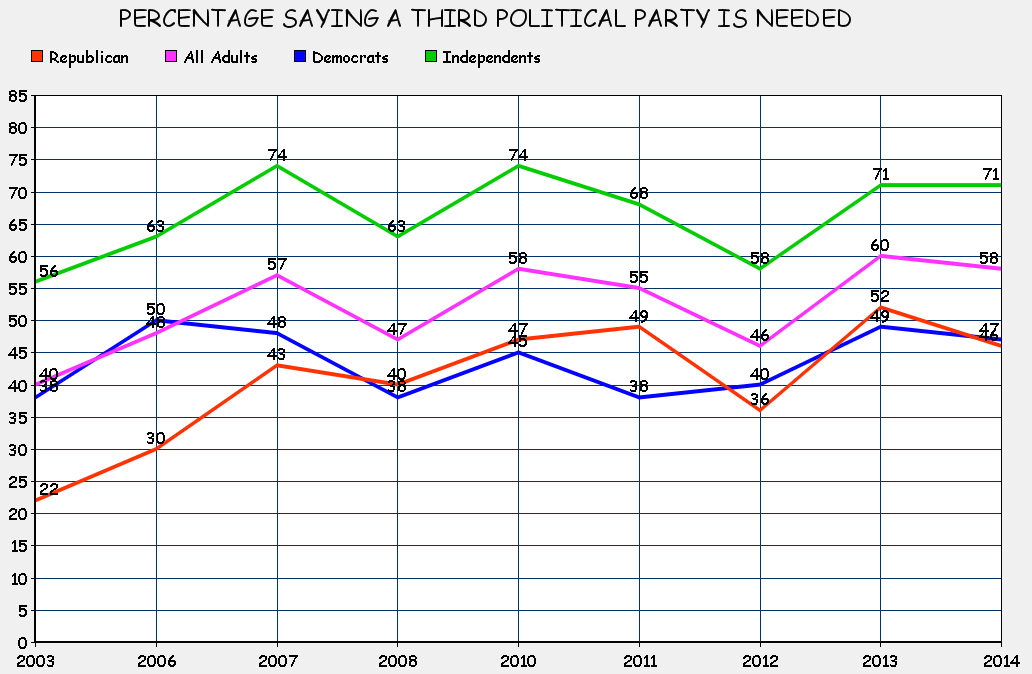 This chart was made from information in a continuing survey by the Gallup Poll -- with the last survey being taken between September 4th and 7th of a random national sample of 1,017 adults, and has a margin of error of 4 points. It seems to show that the desire for a third political party is currently high in this country. That is what 58% of the general public says, along with 71% of Independents, 47% of Democrats, and 46% of Republicans.

I have to take this with a grain of salt though. Why? because there are already a plethora of third parties in the United States -- and two of them are regularly on the ballot in most, if not all, states. They are the Green Party (established in 1991) and the Libertarian Party (established in 1971). These parties offer voters an alternative both on the left and the right of the political spectrum.

So there are a wide range of third parties in the United States, representing a wide spectrum of political opinion. Note on the chart though that there have been other years recently where the desire for a third party was high (notably in 2007 and 2010). What happened in those years? The Greens and Libertarians finished in medium to high single-digits, and the other third parties got only a tiny percentage of the vote (1% or less). Most Americans, while saying a third party was needed, wound up voting for the Democrats and Republicans -- and I expect the same thing will happen this year.

Personally, I think it would be a good thing to have several powerful political parties (like most other nations do). If the Greens and Libertarians were able to get votes nearly equal to the Democrats and Republicans, and elect representatives to the House and Senate, it would be a good thing for the United States. There would be a much better flow of ideas about about how to solve the nations problems, and Congress would have to compromise to get anything done (which is not a bad thing). But regardless of what Americans say in a survey, they are not yet ready to abandon our two-party system.

So what does this poll mean then (since voters are not really ready to vote for a third party, even though they are available on the ballot)? I believe it is just indicative of widespread voter anger with the government in Washington, especially the anger at the inability of Congress to compromise and fix our economic problems (high unemployment, falling median wage, poverty minimum wage, shrinking middle class, faltering GDP, etc.). The voters are mad, and they are in a definite anti-incumbent mood. While voters are not likely to vote for any third party this year, that anti-incumbent mood should scare the hell out of elected officials in competitive districts -- because it mean many of them might not have a job next year (at least until Wall Street hires them as lobbyists).