A Little Good News In Honor Of Earth Day 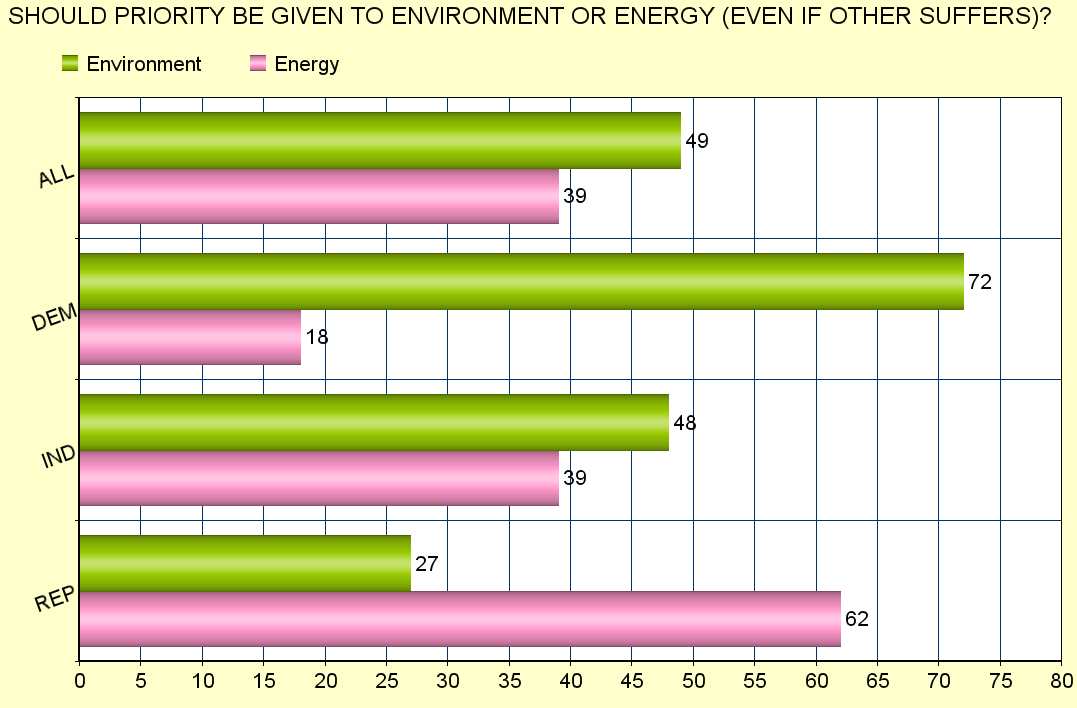 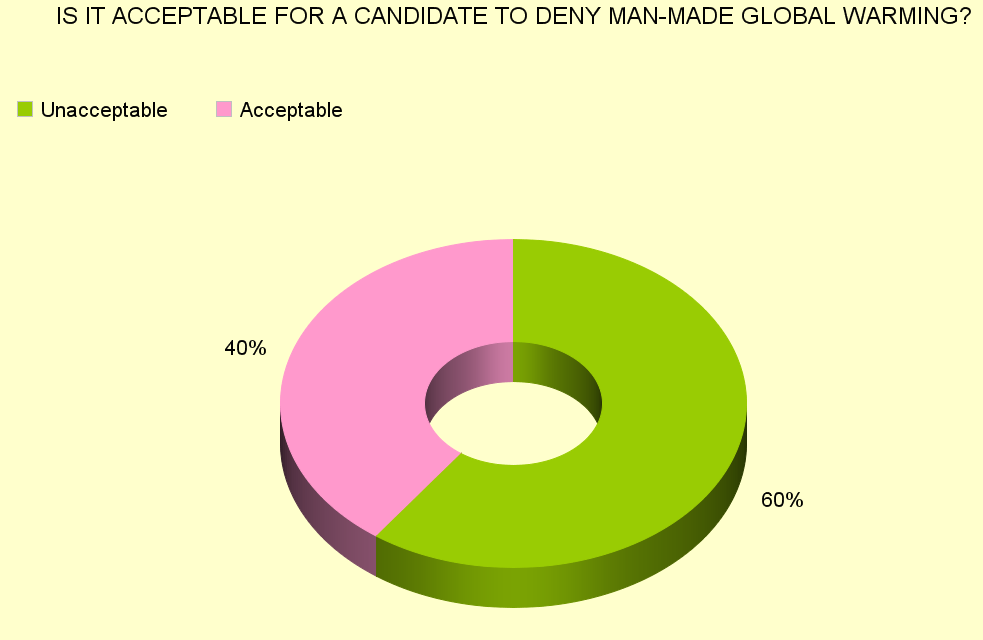 In honor of Earth Day, I thought we could all use a bit of good news. And the good news I found was in the form of two recent surveys. The top chart is from a Gallup Poll done between March 5th and 8th of a random national sample of 1,025 adults, with a margin of error of 4 points. It shows that more Americans (49%) would choose to protect the environment over developing new energy -- even if that meant energy development would suffer. Only 39% disagree.

The bottom chart is from a new YouGov Poll done on April 15th and 16th of a random national sample of 1,000 adults, with a margin of error of about 4 points. It shows that 60% of the population would find it unacceptable for a political candidate to deny man-made global climate change. If our congressional districts were drawn fairly (instead of gerrymandered), and more people understood the urgency of global warming, we could have a different Congress -- one that would actually take some action.

To sum up on this Earth Day, I thought it would be good to bust some myths being spread by deniers of global warming. The following is from the website of The Good Housekeeping Institute:

MYTH #1 -- IF GLOBAL WARMING WAS AN ISSUE, BLIZZARDS WOULD BE ON THE WANE.

FACT: We're seeing stronger blizzards because of global warming. As the air, land and sea get warmer, more water evaporates. So when a storm comes along, there's more water to pick up and dump, meaning more snow when it's cold out.

MYTH #2 -- IT'S ALL A NATURAL CYCLE; HUMANS CAN'T AFFECT SOMETHING AS BIG AS EARTH.

FACT: Yes, Earth's temperature goes up and down with the ice ages. But scientists think temperatures should be dropping in preparation for the next ice age, and instead they're soaring. According to NASA, thermometers around the world find that the average global temp has been rising since 1880; 2014 was the hottest year yet. And before the Industrial Era, natural levels of carbon dioxide were about 275 parts per million (ppm). Now, due to all the coal, oil and gas we've burned, levels have topped 400 ppm. The explanation? Us.

MYTH #3 -- IT MAY BE REAL, BUT IT'S NOT AFFECTING MY FAMILY RIGHT NOW.

Fact: Climate change is already hitting our pocketbooks: U.S. losses due to natural disasters like storms, floods, droughts and wildfires rose between 1980 and 2014. Your family may also be affected by worsening allergies from plants that bloom earlier and produce more pollen due to climate change.

MYTH #4 -- LIVING "GREEN" TAKES TOO MUCH EFFORT AND COST.

FACT: Many of the reforms that help Earth can also ease your bottom line, and they're simple to implement. Food waste is the largest component of landfill, so by reducing it — eat leftovers! — we can all significantly lessen methane-emitting landfill material and save cash. More efficient appliances and cars may cost extra up front, but they use so much less energy over the lifetime of the product that you come out ahead.

MYTH #5 -- EVEN IF WE DID SOMETHING ABOUT IT, CHINA'S BUILDING A COAL PLANT A WEEK. WHY BOTHER?

FACT: Our per-person carbon dioxide emissions are almost three times those of China. Yes, China has a lot more people, but the Chinese are doing something about it: They're number two in the world in solar power (we're number five), and they're also beating us on wind power — they're first, we're second.

FACT: Our lifestyle decisions control a shocking 75% of emissions in the U.S. If we all improved the energy efficiency of our homes by just 10%, it would be the equivalent of taking some 25 million cars off the road! And as voters, we control a portion of the other 25%. Check out the nonprofit Citizens' Climate Lobby, which can help you write letters to Congress in support of Earth-friendly legislation.
Posted by Ted McLaughlin at 12:08 AM