Are Democrats More Liberal Than In The Past ? 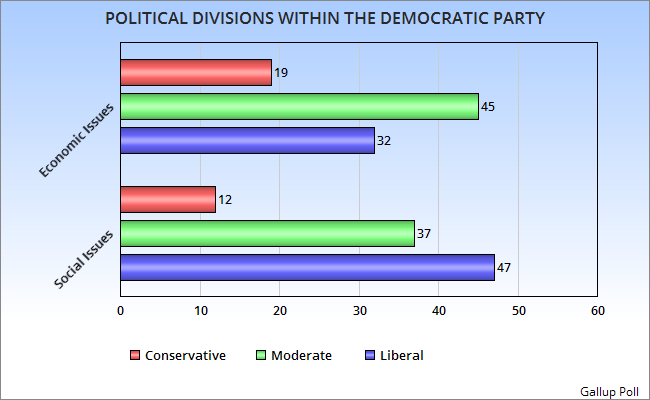 The Gallup Poll recently released a poll they did between May 6th through 10th of 1,024 Democrats (with a 4 point margin of error). Their title for the release was "Democrats in the U.S. Shift to the Left". Many on social media, and some in the major media, are using this to say it gives Bernie Sanders a chance to win the Democratic nomination. I still don't see that.

I looked at the poll also, and the chart above shows what I found from the Gallup results. There has been a shift to the left among Democrats, but it is not a shift that puts the liberals back in charge of the party. Liberals do have a plurality (47%) on social issues, but when it comes to economic issues (the issues most voters will be voting on), liberals drop 15 points and moderates have the plurality (45%).

This means a candidate cannot win the nomination by appealing only to liberals in the party. A winning candidate must appeal to both liberals and moderates -- and at least for now, Hillary Clinton is the only candidate appealing to a majority of both groups.
Posted by Ted McLaughlin at 12:06 AM