Schumer Is Not Qualified To Replace Reid As Dem Leader 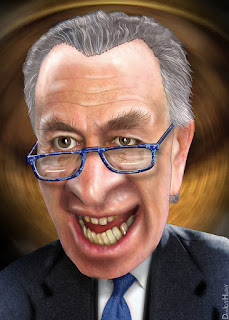 The recent announcement by Senator Chuck Schumer (D-New York) that he will be voting against the Iran Agreement negotiated by President Obama is shocking to say the least. And even worse, just like the Republicans he is siding with, he offers no alternative to passing the agreement.

Does he really think that killing the agreement won't allow Iran to develop a nuclear weapon even faster? Does he think Iran will return to the negotiating table if this agreement is killed? Does he think our allies (and other nations) will even consider re-instating the economic sanctions if Congress kills the agreement? If so, then he is a damn fool!

And we don't need a fool, or a Democrat disloyal to the president, as the leader of Senate Democrats. He has been touted as the odds-on favorite to replace Harry Reid as the party leader in the Senate when Reid retires (Reid is not running for re-election in 2016).

The Senate Democratic Leader (whether the Majority or Minority Leader) should be someone who is loyal to the president and the wishes of party members. This outrageous decision shows us that Schumer is not someone who can be trusted to do that. We don't need a party "leader" that puts the wishes of Benjamin Netanyahu over the policies of a Democratic president -- or that puts his own re-election chances above the values of the Democratic Party.

We need a loyal and firmly Democratic senator in that important position. Schumer has shown he cannot be trusted to be the party's leader in the Senate. I urge all those Democrats who have committed to vote to make Schumer the Democratic Party Leader in the Senate to withdraw those commitments, and look around for a better (and more loyal) Democrat for the position.

I know some of my progressive brothers and sisters want Senator Elizabeth Warren (D- Massachusetts) to be the party leader in the Senate -- but, as much as I love Senator Warren, I just don't see that happening. I would suggest someone like Senator Dick Durbin (D-Illinois). He has served a long time (earning the respect of his colleagues), thoroughly understands the Senate rules, is a good progressive, and has been loyal to the party and the president.

(NOTE -- The caricature of Chuck Schumer above is by DonkeyHotey.)