Fiorina Debate Blunder Insures She Will Never Be President 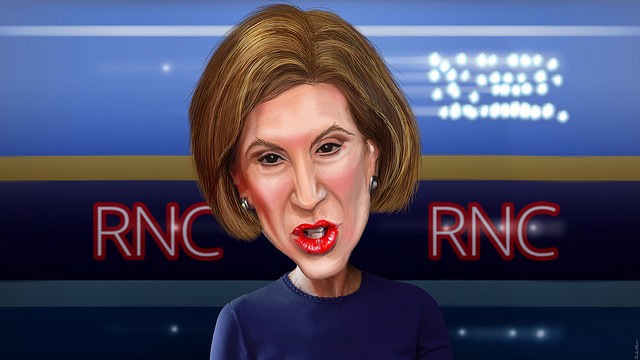 (This caricature of Carly Fiorina is by DonkeyHotey.)

It seems that most of the GOP candidates think the path to the White House lies in demonizing the media (as they happily did in Wednesday's third GOP debate). I can understand why they would want to do that. They lack any solutions to the nation's problems -- still relying on the failed "trickle-down" economic policy and the more war foreign policy. They refuse to admit that both of those policies have been disastrous for the country, and would prefer to put the blame on the media for not praising their failures.

But I think one candidate stood out in stupidity during the debate, and in doing so probably ended any slim chance she might have had to become this nation's president. That candidate is Carly Fiorina. She did that by attacking two of the most popular things the federal government has ever done -- Social Security and the minimum wage. And she showed her complete lack of understanding about our Constitution by claiming that both were actually unconstitutional. She said:

She doesn't seem to care that the Supreme Court has ruled both Social Security and the minimum wage to be constitutional -- ignoring the fact that the Constitution gives the federal government the right "to lay and collect taxes" and to "provide for the. . .general welfare of the United States". Surely, allowing workers to invest in a government program that will insure they don't have to live in abject poverty when they retire, and insuring that those who are willing to work a full-time job don't have to live in poverty, are programs that insure the general welfare of this country.

She also ignores the fact that both of these government efforts have been largely successful. Before Social Security was enacted, over 50% of the nation's senior lived in poverty. Now that figure has been reduced to about 10% (and with an expansion of benefits could be even lower). The minimum wage gave workers a livable level of income. That has been eroded by government inaction and needs to be raised now, but Fiorina is in that group of far-right Republicans who would not only not raise the minimum wage, but would eliminate it altogether -- a move that would insure millions of working Americans must live in poverty (and put a downward pressure on the wages of all American workers).

She shows us that she simply doesn't care for Americans that are not rich. But that is not an attitude that the general public in this country will tolerate. A hefty majority of Americans support both Social Security and the minimum wage. Poll after poll has shown that the public wants Social Security protected (and oppose any cuts to the program). And those polls also show that the public wants the minimum wage raised. The debate is not over whether the minimum wage should exist, but over how much it should be raised (and a significant majority would like it raised to at least $10 and hour).