Bush Did NOT Help Himself In Debate (He's Still Toast) 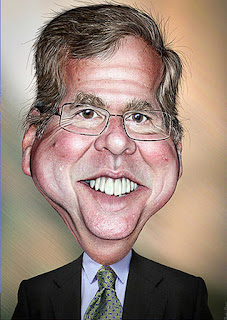 Much of the media chatter among pundits is about whether Jeb Bush helped himself in Tuesday night's debate. And most seem to think he did -- noting that he seemed to have more energy, and was more engaged in this debate.

I'm not buying that. I think he probably actually hurt his chances to win the Republican nomination in that debate. Why do I say that? In a word -- immigration.

When the topic was brought up, several candidates (Trump, Cruz, Rubio) tried to position themselves as being the toughest against undocumented immigrants. When Bush got his chance to speak, he did just the opposite. He said:

“Sending 11 million people back is not possible, and it’s not embracing American values. Even having this conversation sends a powerful signal. They’re doing high-fives in the Clinton campaign over this.”

Now that may sound reasonable, and it actually is. And it would probably earn him some brownie points in a general election -- but he is not in a general election. He's running for the presidential nomination of the Republican Party. And all he did with that statement is remind GOP voters that he is the candidate that would provide a path to citizenship for undocumented immigrants.

The Republicans Party is a party ruled by racists and xenophobes. Not every Republican is a racist or xenophobe, but a majority of them are. In most states the party is run by the ultra-right-wing teabagger element -- and you can bet they are not going to like Bush's statement. They have dreams of being able to deport 11 million people (the issue that has rocketed Donald Trump to the top of Republican polls.

Jeb Bush shot himself in the foot by reminding GOP voters that he disagrees with them on immigration -- and doing so will hamper his efforts to get himself back in the race. There's still nearly three months until the primary season starts and anything can happen -- but Bush did not help his chances last Tuesday night.

(NOTE -- The caricature of Jeb Bush above is by DonkeyHotey.)
Posted by Ted McLaughlin at 12:06 AM