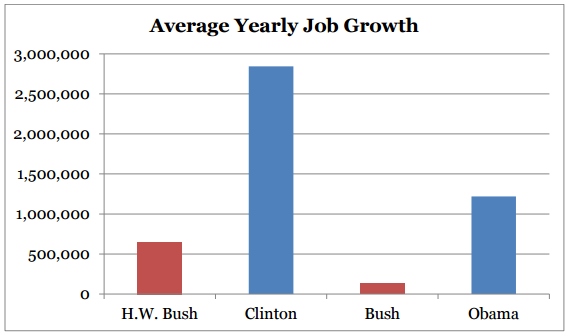 (This cart is from Daily Kos.)

The Republicans like to claim that they know how to create jobs in this country. They say jobs can be created by cutting taxes on the rich and cutting government spending. But they have a problem. As the chart above shows, the last two Republican presidents have been very poor at job creation -- finishing far behind the last two Democratic presidents.

That is especially true of George W. Bush (Bush II), who followed that GOP plan to the letter. He didn't create many jobs, but did throw the economy into a recession with that policy.

That's because jobs are not created by giving more money to the rich, or by cutting government programs (which takes money out of the economy). Jobs are created only by increased demand for goods and services, and taking money out of the economy just decreases that demand. Meanwhile, the rich already have enough money to buy what they want, and giving them more won't significantly increase their spending (or the demand for goods and services).

In an economy like ours, which continues to falter, we need to do just the opposite of what the Republicans want to do. We need to raise taxes on the rich a bit, and use that money to pump more into the economy (in addition to raising the minimum wage) -- giving most Americans more money to spend. That would increase demand, and create more jobs.

The Republicans cling to a policy (trickle-down economics) that has already been proven to be a failure. That policy only helps the rich. They must be voted out of power next year, so the country can be returned to a saner and fairer economic policy.
Posted by Ted McLaughlin at 12:06 AM