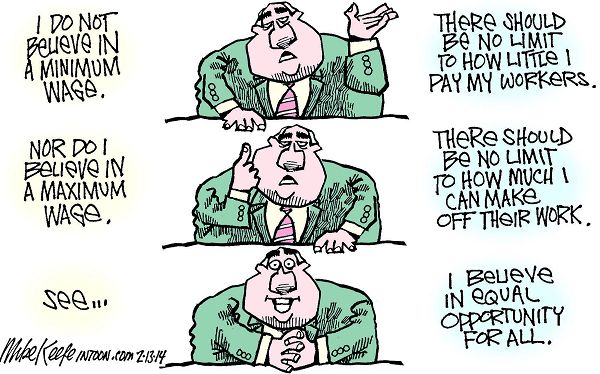 (Cartoon image is by Mike Keefe at intoon.com.)

Regular readers will know that I support raising the minimum wage to a livable wage. I simply don't think anyone willing to work hard in a full-time job should be paid a poverty wage. It's immoral -- and not good business either. However, the Republicans don't agree. While they would love to give the rich more money, they don't want the working poor to have anything more -- and they showed that again in their presidential debate last night.

I didn't watch the GOP debate Tuesday night. My tolerance for lies and greed is too low. But my friend and fellow blogger Frank Moraes is a braver soul, and after watching the debate, this is what he had to say on the minimum wage portion of that debate (at his excellent blog called Frankly Curious):


Another great moment in the debate was the discussion of the minimum wage. I get it: they are against it. But Trump — who was born rich and hasn't really done anything with his money — said we shouldn't raise the minimum wage. Trump actually said that "wages [are] too high." This is because we have to compete with other countries. Now, great business thinkers are focused on productivity and how to make things more efficiently. But Trump wants us to become competitive by lowering wages?! It is truly amazing.
After Trump tackled the question, Carson did so by noting that it would lead to fewer jobs. This is one of those "facts" that every conservative knows, but just isn't true given our currently low minimum wage. He said, "You know, I can remember, as a youngster — you know, my first job working in a laboratory as a lab assistant, and multiple other jobs. But I would not have gotten those jobs if someone had to pay me a large amount of money." Let's think about that for a moment, shall we?
Ben Carson was born in 1951. Let's assume he got his first job at 17. That was in 1968. In 1996 dollars, that minimum wage was $7.21. Today, the minimum wage (in 1996 dollars) is $4.82. If we adjust the nominal $7.25 minimum wage to its level when Ben Carson got it, he was making $10.84. It's true that this is not a lot of money. But it is a lot more money than minimum wage workers are making now. I continue to be amazes at people like Carson who think that people are doing well today on minimum wage because they only made $1.60 (the nominal level in 1968). Inflation is a huge issue for these people when it comes to their investments, but when it comes to the minimum wage, inflation just doesn't exist.
But of does it play! The audience just eats it up. The minimum wage is a starting salary! There's no need to have it! And indeed, the minimum wage was a starting salary — at one time. Now it is different. Roughly 30% of all hourly workers make near the minimum wage. These are not high school kids with their first job. This is just the American economy. But even if it weren't, why is it that people like Ben Carson think they deserved so much better pay as kids just because they were born two generations earlier?
Then we got to Rubio who said that if we pay people more, we will replace them with robots. This is indicative of something I talk about a lot: people not understanding how business works. Companies are always automating — always looking for ways to reduce their labor costs. Rubio is putting forward the old conservative standard, "Companies hire people out of the goodness of their hearts!" McDonald's is already experimenting with kiosks. And no: it isn't out of fear of an increasing minimum wage; it is just what companies do — all the time.
The takeaway from the debate is that we need to pay the poor less so that we can be competitive so that the rich can make more money. In addition, we must tax the rich less so that they will be incentivized to sell more stuff, the extra profits of which will not be shared with the poor. This is what the Republicans have to offer: more income inequality — a worse country for almost everyone. But in exchange, they are going to be "strong" like Vladimir Putin.
Posted by Ted McLaughlin at 12:02 AM