Why Won't Bernie Sanders Say "I Am A Democrat" ? 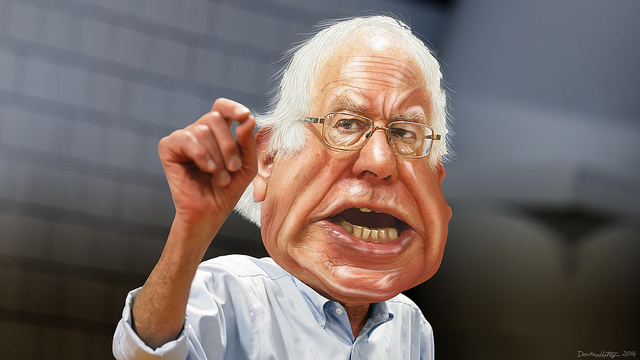 (Caricature of Bernie Sanders is by the inimitable DonkeyHotey.)

As a long-time Democrat, there is something about Bernie Sanders that bothers me a lot -- his utter failure o claim membership in the Democratic Party. I know Bernie caucuses with the Democrats in Congress. He does that because the Democrats are closer to his views than the Republicans, and he could not get any committee seats without doing it.

But that does not make him a Democrat. In fact, he has made it clear that he is an Independent, in spite of caucusing with the Senate Democrats. And he has done that throughout his political career. In fact, he has been so adamant about not being a Democrat that he has rejected Democratic efforts to nominate him as the candidate of their party in the past.

Now he is running in the Democratic presidential primary. But he has not said, even a single time, that he is a Democrat. And he has raised no money for other Democratic candidates (for the House and the Senate). Hillary Clinton has (because she is proud to be a Democrat), but Sanders has not. Why not?

Now we have further evidence of him not being a Democrat. His super-PAC in Vermont (Friends of Bernie Sanders) has already started raising money for his senate run in 2018 (and has raised $1,196,682). But the most troubling part is that the group says it is supporting "Independent" Bernie Sanders -- not "Democrat" Bernie Sanders. It looks like if he loses the Democratic presidential primary, Sanders will desert the party and run as an Independent again.

That makes me wonder -- if he wins the nomination of the Democratic Party, will he run as a proud Democrat, or as someone independent of the party that nominated him? The latter is unacceptable.

Why won't Bernie Sanders say "I am a Democrat"? Because he's not a Democrat, and never has been. He's a political opportunist trying to use the Democratic Party apparatus for his own ends. And as a Democrat, I simply can't support any candidate not proud to wear the Democratic label.
Posted by Ted McLaughlin at 12:06 AM