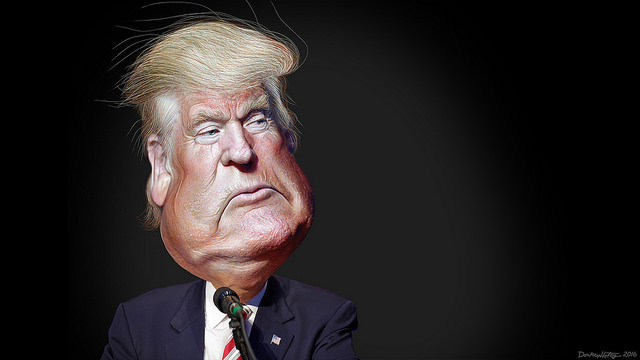 (This caricature of Donald Trump is by DonkeyHotey.)

NBC News fact-checked many of Donald Trump's statements and accusations in the final presidential debate. Here is what they found:

Trump said the election is "rigged." It's not.

Trump said Ginsburg apologized. She didn't, she said her comments were "ill advised."

Trump said that Clinton supports all kinds of abortion, including ripping "the baby out of the womb of the mother just prior to the birth." That's mostly false.

Trump said ICE endorsed him. They didn't, a union of some employees did.

Trump said the U.S. needs to focus on getting the "bad hombres" out. That's current U.S. policy.

Trump said he doesn't know Putin. He repeatedly said he did.
Trump said "Hillary, you have no idea" that Russia is behind her campaign manager's hack. U.S. intelligence says it is.
Trump said it's a lie to say he's advocated for more countries to get nuclear arms (he has) and that he's asked why the U.S. can't use its nuclear arms (he reportedly has.)
Trump said he didn't say his accuser's looks undermined her sexual misconduct claim against him. Here's a video of him doing that.
Trump said the Mosul invasion was launched to make her look good. It wasn't.

Trump said he didn't know any of his accusers. He did.

Trump said his accusers claims have been debunked. They haven't.

Trump said he opposed the war in Iraq. He didn't.

Trump said Clinton will raise your taxes. Only if you're really rich.

Trump claimed illegal immigrants are treated better than veterans. They're not.