Democrats Should Resist Pressure To Move To The Left 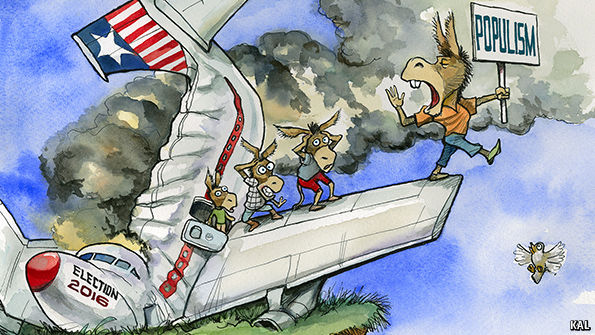 (Cartoon image is by Kevin Kallaugher [KAL] in The Economist.)

Since the Democratic presidential candidate lost the electoral college (although winning the popular vote by more than a million votes), there has been much wringing of hands in the party about what they should do. Some are even claiming that Bernie Sanders would have won the election, and the party must now move to the left-wing populism of Sanders. I don't think that's a good idea.

Sanders was popular among a fairly large segment of the Democratic Party, but there is no evidence he could have appealed to a majority of Americans. In fact, after the GOP finished beating him over the head with a hammer and sickle (i.e., the socialist label), I think he would have done much more poorly than Hillary Clinton did.

While it's true that many workers voted for a populist vision in this election, it was not a left-wing populism. It was a right-wing version of populism. As a left-winger myself, I would like to believe that a majority of Americans favor the left-wing -- but that is simply not true. And it is also not true that they favor the right-wing. As they have almost always been, most American voters are moderates. While they like some left-wing ideas and some right-wing ideas, they don't want to fully embrace either extreme.

Americans do want change, but they want that change to come in moderate steps (so they can gauge whether the change is going to work or not. Democrats do need to pursue a progressive agenda (protection of Social Security & Medicare, strengthening unions, raising the minimum wage, closing the income gap, protecting the environment, assuring the rich and corporations pay their fair share of taxes, etc.), but they must avoid then perception by the public that they are a left-wing (i.e., socialist) party.

The Democrats moved too far to the left back in 1972, and they were severely punished by the voters in that year's election. The same thing would happen in 2020 if the Democrats do that again.

I know my leftist friends will not like what I'm saying, but the Democratic Party must continue to embrace a moderate progressivism. Demanding more (and chasing moderates out of the party) will just result in disaster. Democrats win when they have a "big tent" party. They lose when they don't. That's just the way it is in American politics.
Posted by Ted McLaughlin at 12:08 AM