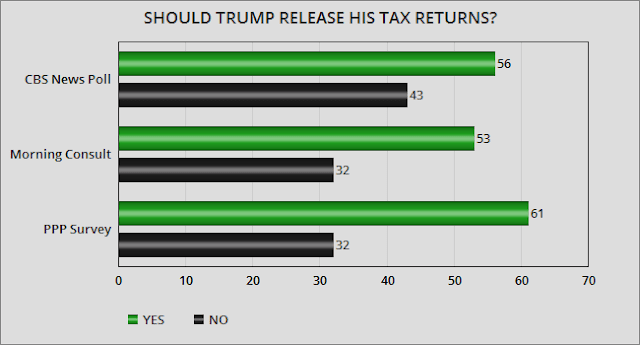 During the campaign, Donald Trump said he would release his tax returns once an audit was complete. Well, it's time to submit a new tax return and he's still refusing to release returns from previous years.

Trump says the public is not interested in seeing his returns -- but thousands of Americans hit the streets to demonstrate for the release of those returns this weekend. And three recent polls show that a majority of Americans still think the tax returns should be released. Those polls are the Public Policy Polling survey, the Bloomberg / Morning Consult Poll, and the CBS News Poll.

Trump had hoped this issue would go away once he was president, but that's not happening. And I don't think it will go away anytime soon.
Posted by Ted McLaughlin at 12:06 AM