Sanders Is NOT A Democrat And Is NOT Helping The Party 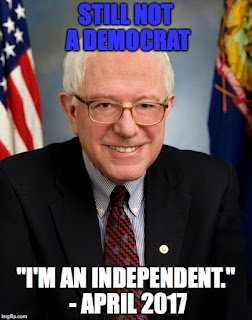 The following is part of a post by David Speakwell at Speakwell Pages. I agree with every word he has written.

I’ve finally come to a decision on Senator Sanders of Vermont.Sanders is in it for Sanders. Tom Perez is the latest victim of his manipulation. Tom Perez most likely thought he was doing the right thing. There is a rift in the Democratic Party. I can just see ole Tom mulling the idea over in his head. A unity tour! That’s the ticket! I’ll show everyone that the DNC is willing to make nice with Sanders and work together. We’ll be a big tent party going forward with room for all Democrats.Great idea Tom, one problem though.Nobody told Sanders.You can’t have a Democratic Unity Tour when one half of the tour doesn’t consider himself a Democrat. During the middle of the tour, this happened,"No, I'm an Independent," Sanders said when asked by MSNBC's Chris Hayes whether he now identifies as a Democrat.Whaaaaaaaat? Sanders ran for President as a Democrat. During the primaries, campaign manager Jeff Weaver (who has been elevated to work for the DNC) assured people that Sanders “would remain a Democrat after the election.”So much for remaining a Democrat. Tom Perez, you poor fool. You’ve been had, you’ve been taken, and royally fooled. Sanders spun a story for you that you swallowed hook, line and sinker. On the Democrat’s dime you’ve toured a man around the country that has no interest in helping the Democratic Party. He’s interested only in helping himself. Didn’t see the devil coming did you Tom? Sanders has zero interest in a successful big tent Democratic Party. Sanders’s only interest is in Sanders’s own brand of progressivism. Woe be to anyone that disagrees with him and his zealots.Here is another great example of Sanders “helping.” Democrat Jon Ossoff is currently battling to win Georgia’s 6th Congressional District in a special election. The seat was once held by Newt Gingrich and has been Republican controlled since the 1970’s. Ossoff is within a couple percentage points of flipping the seat. Sanders has to stick his nose in when asked if Ossoff was progressive.“I don’t know,” Sanders told the The Wall Street Journal “If you run as a Democrat, you’re a Democrat. Some Democrats are progressive, and some Democrats are not,” the 2016 presidential candidate added.

First of all, did Sanders forget that he ran as a Democrat? Apparently using the party’s resources and name wasn’t enough to make him a Democrat. Such hypocrisy. Secondly, why do you need to cast doubt on a guy who is sooooo close to flipping a Republican seat? Because it’s all about Sanders. Ossoff’s election is likely to be incredibly close, I hope Sanders’s fanatics don’t stay home because of his backhanded comments. I just can’t take it anymore. I’m tired of Sanders attacking the Democratic Party. I’m tired of Sanders and his sycophants attacking Democrats that they think aren’t good enough and I’m tired of Sanders sticking his nose into the Democratic Party when he can’t even bring himself to say that he is a Democrat.If you want a say in family business you should be a part of the damn family. When the family makes big decisions, like where to go on vacation, they don’t give the old man who lives down the block a vote. I followed the career of Senator Sanders for years before he ran for President. I really liked the guy. I thought he was great for Vermont. His treatment of HIllary Clinton and the Democratic Party has turned my thinking around 180 degrees. For the longest time I avoided saying anything negative about Sanders because early on, there was a chance that he could have been the Democratic candidate for President. I would have supported him and voted for him without misgiving.But time went on and Hillary clearly had the nomination sewn up. Sanders still didn’t stop. He undermined her at every turn and only begrudgingly and half-heartedly supported her nomination. The very fanatics he created refused to back Democrats against Trump. I couldn’t decide for the longest time whether he meant well and was kinda clueless or whether he was actually trying to do harm to the Democratic Party.I’m convinced now that he means to do the Party harm. I’m convinced that Sanders hates the big tent Democratic Party. In his mind, moderate Democrats and conservative Democrats aren’t welcome. He talks a big game about independents but again, he’s only interested in independents that share his personal ideology.The Democratic Party is too big and too broad to take down all at once so he’s worrying at it. He’s sunk his teeth into our neck. He and his followers doggedly cling to our vitals, tightening their grip. Poor Tom Perez, he tried to get them off nicely.They aren’t going to let go Tom.You can’t have unity when one-half of the tour isn’t really interested in working with anyone else. There is no compromise in Sanders and his followers.I’m a progressive that wants to work with everyone. We forget sometimes that representatives are supposed to represent the place they come from. Sanders represents Vermont well, but Sanders style progressivism isn’t a good fit for West Virginia or South Dakota. Democrats around the country should be a good fit for their own homes. Sanders unbending purity philosophy can’t accept that. That’s why he has to criticize candidates like Ossoff and what is good for the Democratic Party be damned. I can’t be silent any longer. Being tolerant of Sanders and his grandstanding has only emboldened him and made the situation worse.I want a party that respects ideological differences and gets things done. Purity is a luxury we can’t afford.
Posted by Ted McLaughlin at 12:02 AM