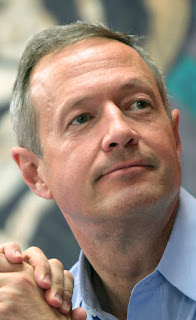 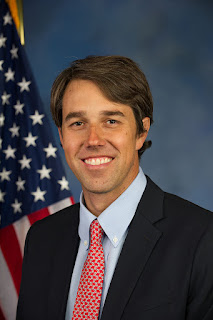 (These photos are from Wikipedia. The O'Malley photo is by Gage Skidmore. The O'Rouke photo is the official photo from his time in the U.S. House.)

Martin O'Malley, the former governor of Maryland, is a good Democrat. He ran for the Democratic presidential nomination in 2016, and some thought he might toss his hat in the ring again in the 2020 race.

That's not going to happen. In a guest column in The Des Moines Register, O'Malley made it clear he is not going to run this time. Then he went further and endorsed a possible candidate -- Beto O'Rourke.

Here is what O'Malley wrote:


I will not be running for president in 2020, but I hope Beto O’Rourke does. And this is why.
In 2016, my long-shot presidential candidacy found its flame extinguished between a rock and an angry place in my own party. America wasn’t in the mood for new leadership. We were in a mood of anger, rage and retribution. And in this mood, Donald Trump’s candidacy rose. It was good for ratings, and good for the Russians; but, bad for America. And, we got what we got.
But now, there is a different mood in our nation. People are looking for a new leader who can bring us together. They are looking for a unifier and a healer. They are looking for a leader of principle, and they are now looking for a fearless vision.
Yes, the anxieties about the future are higher than ever.  Our whole world — and our country with it — is experiencing the growing pains of a third Industrial Revolution. And this one will change the future of work as much as the last two. Perhaps, even more so.
Our parents and grandparents faced rapid change and security threats in their own day. But they didn’t try to build a wall around their country. They didn’t shut down their national government, or turn their backs on one another.
Instead, they faced a changing future head-on. They made their children and grandchildren winners in that changing world rather than its victims. And so too, must we.
This courage to face change — with truth about ourselves and compassion for one another — is a big part of what it means to be an American. Tapping into this innate American quality is the key to moving our country forward.
I know this because over the past two years, I’ve traveled to over 30 states to help Democratic candidates at every level of government. Whether it was Iowa or New Hampshire, Washington state or Georgia, voters were clearly longing for new leadership.
These leaders include Lucy McBath, a mom who lost her son to gun violence, and responded with a determination to save other children's lives by winning a seat in Georgia’s 6th Congressional District. They include Allison Ikley-Freeman, a social worker and lesbian mother of two, who successfully flipped a Trump +40 state senate seat in Oklahoma.
I had the honor of campaigning with both of these heroes, and over 120 other courageous Democrats across our country in the 2018 midterms. They spoke to the goodness within us as a people. And they spoke with a fearlessness about the future we can build together.
All of which brings me to Beto O’Rourke.
In his courageous run for U.S. Senate in Texas, O’Rourke ran a disciplined and principled campaign that also managed to be raw, authentic, and real. He spoke to the American values of honesty, compassion for one another, and courage in the face of a rapidly changing future. These are the American values alive and well in the hearts of our young people. These are the values which tell us where America is headed. And with these values, O’Rourke very nearly defeated the incumbent senator and Republican runner-up for president — in Texas.
The fearless vision and unifying message which brought people together in Texas also sparked imaginations all across our country. And, I believe, will again — if Beto O’Rourke runs for president.
The challenges we face will not solve themselves. Building an economy that works for all of us, reversing climate change, passing immigration reform — they all require leadership. O’Rourke has the wisdom to listen, the courage to lead, and a rock-solid faith in the powerful goodness of our nation.  Because he is of a new generation, O’Rourke understands that a new way of governing — with openness, transparency, and performance — is called for to tackle our problems in the Information Age. And because he is from a border state, O’Rourke understands the enduring symbol of our country is not the barbed wire fence, it is the Statue of Liberty.
So, while I will not be running in 2020, I would like to put my faith and trust in a fearless American future — an American future large enough for all of our children.  Like so many other Americans, I believe we need new leadership to make that future a reality. And, I believe the new leader who can best bring us together and turn us around to create that better American future, is Beto O’Rourke.
Posted by Ted McLaughlin at 12:04 AM