Attacking The Obama Administration Is A Bad Mistake 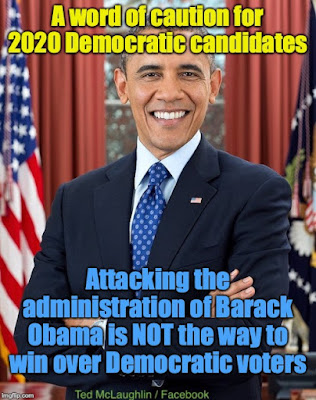 Some of the Democratic presidential candidates did a very stupid thing during the Wednesday night debate. They tried to get at Joe Biden by attacking the Obama administration. Frankly, I was aghast.

If they think attacking the Obama administration is going to get them any Democratic votes, they are sorely mistaken!

First, President Obama was a very good president. During his first two years, when he had the backing of a Democratic Congress, he accomplished some very good things. Among these were regulations on Wall Street to prevent another crash (like the one that led to the Bush recession), and the creation of a consumer protection bureau to keep financial institutions from ripping off ordinary Americans.

He also got the Affordable Care Act (Obamacare) passed, covering millions of Americans with insurance that had not been able to afford it before. Was it perfect? No, but it was much better than what had been in place before. And President Obama had wanted a better system with a public option, but Congress denied him that.

Second, Barack Obama is the most popular Democrat in this country (with the possible exception of his wife, Michelle). No other Democrat, including all 25 candidates for the 2020 nomination, is as popular with both Democrats and Independents as President Obama.

I can understand the Democratic candidates attacking each other (even though I don't like it at all), but trying to get at Biden (because he was Obama's vice-president) by attacking the Obama administration is beyond the pale. It's just wrong, and it's not the way to win over any Democratic voters!
Posted by Ted McLaughlin at 12:06 AM