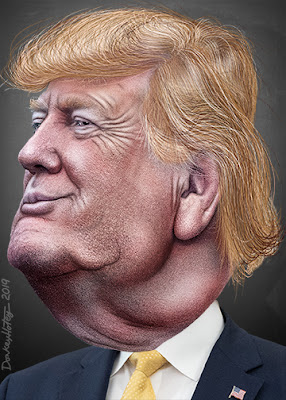 (This caricature of Donald Trump is by the inimitable DonkeyHotey.)

Donald Trump has been bragging about the economy. He would like you to think the current economy is the greatest ever in this country, and it's due to his own efforts. neither of those is true.

The economy was doing well for 10 years before Trump took office, and his actions have not improved it. In fact, his actions may well have put the economy in danger of falling into a recession in the next few months according to economic indicators.

In an excellent op-ed in The Washington Post, Jennifer Rubin takes a look at Trump's actions regarding the economy, and she calls his economic record "one big con". She's right.

Here's what she wrote:


President Trump came into office promising some fabulous yet unspecified health-care plan to replace the Affordable Care Act. No plan existed; every plan Republicans came up with managed to reduce the number of insured. Trump promised never to cut entitlements; his fiscal 2020 budget proposal would have done just that.
Trump said he’d bring back manufacturing. In fact, it slowed and now has slumped. (“Manufacturing has slowed amid global uncertainty,” NPR reported earlier this month. “That’s one of the reasons the Federal Reserve gave for cutting interest rates this week.”)
Trump said he’d get tough on drug companies. He hasn’t. He said his tax cut would be aimed at the middle class, deliver $4,000 a year to the average American family and permanently boost business investment, pushing growth above 3 percent. Nope, nope and nope.
The tax cut greatly favored the rich and corporations, no $4,000 raise materialized, business investment tapered off, growth is below 3 percent, and the deficit ballooned. Trump is incapable of being embarrassed, but you’d think all those conservative think tanks, saner White House advisers (e.g. former adviser Gary Cohn) and supply-side theorists who pushed all this would be just a little sheepish.
John Harwood of CNBC writes, “Benefits from what President Donald Trump called ‘the biggest reform of all time’ to the tax code have dwindled to a faint breeze just 20 months after its enactment. Half of corporate chief financial officers surveyed by Duke University expect the economy to shrink by the second quarter of 2020. Two-thirds expect a recession by the end of next year.” Harwood found:

After an uptick in the second quarter of 2018, growth declined in the next two quarters to end up at 2.9% for the year.
Goldman Sachs economist Jan Hatzius says that second-quarter surge – initially measured at 4.2% but later revised down to 3.5% – represented the tax law’s peak impact. He expects it to vanish altogether by late this year or early 2020, as the economy returns to the same 2% growth levels Trump inherited from President Barack Obama.

As for workers’ pay, real wages increased by 1.2 percent in 2018. (“Ordinary workers had very little growth in wage rates,” Harwood quotes from the Congressional Research Service.)
The biggest economic lie was Trump’s declaration that trade wars are quickly and easily won, American consumers and farmers wouldn’t be hurt and we somehow would get richer by making Americans pay more at stores. Actually, they are paying a lot.
The conservative American Action Forum’s recent study found, “Altogether, the president’s tariffs could increase nationwide consumer costs by nearly $100 billion annually.” Moreover, other countries have not taken the tariffs lying down. “In addition to raising costs for American consumers, tariffs have also resulted in significant retaliation by other countries against U.S. exports. … To date, eight nations have levied retaliatory tariffs of 5 percent to 50 percent on approximately $131 billion of U.S. exports.”
To cushion the blow to farmers who are losing markets, the Trump administration has now put them on welfare, otherwise known as farm subsidies. Another low point in “conservative” economics.
Why this is all not front and center in the Democratic candidates’ campaigns is a bit of a mystery. Certainly, events such as the Dayton, Ohio, and El Paso shootings shift attention. But so far the Democrats are mostly arguing about what new things they are going to do (green energy, improvements to or a do-over on the ACA). They need to remember that a president’s reelection effort is a referendum on his performance. The Democrats would do well to point out that Trump has not fulfilled the promise of his economic populist message — hence the need to distract everyone with outrageous conduct, racism and xenophobia.
Posted by Ted McLaughlin at 12:02 AM