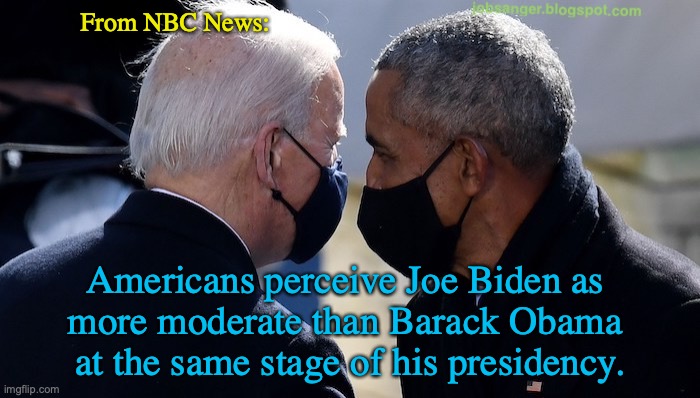 Americans perceive Joe Biden as more moderate than Barack Obama at the same stage of his presidency, a new survey shows, even as progressive activists say the incumbent is governing to the left of the former president.

The perception of Biden as a moderate may be helping him win support from congressional Democrats in competitive parts of the country who might otherwise feel pressure to oppose his agenda.

This surprises me. While President Obama was a moderate in an attempt to get some Republican support, President Biden has asked for that support but refused to moderate his agenda to get it. The programs announced by President Biden are the most progressive of any president since Lyndon Johnson.

But I don't mind the public viewing him as a moderate. It just means the Republicans have failed in their effort to demonize him, and it will make it easier to get his programs through Congress and accepted by the public.