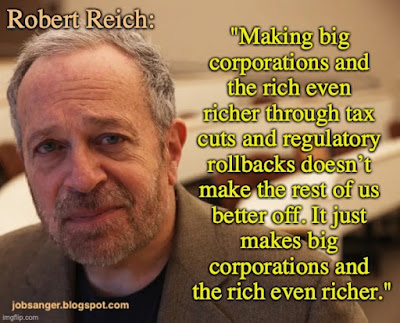 For decades, the Republicans in Congress have been running a con on the American people. It's called "trickle-down" economics.

They have convinced many Americans that the way to a healthy economy is to give give tax cuts and other breaks to big corporations. They told us that that extra money given to rich corporations would trickle down to the rest of the country, and everyone would benefit.

But the problem with that theory is that nothing trickles down. The rich just get richer, and no one else benefits. That's because money doesn't trickle down in a capitalist economy like ours -- it flows upward.

To the extent the Republican Party has any economic platform at all, it’s trickle-down economics. Unfortunately for the GOP, it’s based on three giant myths. It’s time to debunk them once and for all.

Myth #1: Tax cuts for corporations and the rich create more and better jobs.

And contrary to the claim that the tax cut would boost wages by $4,000 a year, a recent analysis found that in the year after the Trump tax cut, wages increased by about the same as they did before it, and then slowed.

Tax cuts for rich individuals don’t trickle down, either. The rich simply get richer. Two years before Ronald Reagan’s first tax cut, the richest 1 percent of Americans owned less than 23 percent of the nation’s wealth. A decade later, after two rounds of tax cuts for the rich, they owned over 28 percent. By 2019, after more tax cuts for the rich by George W. Bush and Donald Trump, people at the top owned almost 35 percent of America’s wealth. Meanwhile, average wealth barely budged for the middle class, and went negative for the bottom 10 percent.

It gets worse. During this pandemic alone, America’s 664 billionaires have added $1.3 trillion to their collective wealth and now own over $4 trillion. That’s almost double the wealth of the bottom half  — 165 million Americans.

But nothing has trickled down. Even before the pandemic, wages stagnated.

Baloney. Not even Ronald Reagan’s surging economic growth rate was driven by tax cuts. It was driven by low interest rates and humongous government spending.

George W. Bush promised his 2001 and 2003 tax cuts would pay for themselves (sound familiar?) by spurring economic growth. That didn’t happen. A 2017 study led by one of Bush’s former chief economists found that the tax cuts had no significant effect on growth. In fact, growth declined, slowing to just 2.8 percent from over 3 percent during the Clinton years. The economic expansion under Bush was one of the weakest expansions since World War II.

Donald Trump claimed his tax cut would be like “rocket fuel” for the economy, and would spur annual growth of 3 percent. After its first year, growth slowed to 1.9  percent.

Finally, a recent study analyzing tax data spanning 50 years from 18 advanced economies found that tax cuts for the rich only benefited the rich and had no effect on job creation or economic growth. I, for one, am shocked.

More rubbish. The cost savings from deregulation go to corporate executives and major investors, while the costs and risks land on the rest of us.

Trump’s Environmental Protection Agency rolled back regulations on everything from clean air and water standards to dangerous chemicals in products — benefiting chemical and fossil fuel executives and investors while forcing everyone else to deal with polluted air and toxins.

And with the help of Congress, he rolled back banking regulations put in place after the 2008 financial crisis — to the benefit of rich Wall Streeters and the detriment of everyone else.

Don’t forget Ronald Reagan’s deregulatory agenda allowed for-profit healthcare companies to flourish, contributing to the out-of-control health care costs we’re saddled with today. And that deregulation of the financial sector was a major cause of the 2008 crash, as it allowed banks to make risky bets.

In other words, the Republican trickle-down claim that deregulation helps us all is baloney. Regulations that protect you and me from being harmed, fleeced, shafted, injured, or sickened by corporate products and services are clearly worth the cost.