Immigration is a hot-button issue these days. That's because the Republicans have demonized immigrants. If they had their way, immigration would be vastly reduced, or stopped entirely. But doing that would be detrimental to this country and its citizens. To maintain a healthy and growing economy, we need more immigrants -- not less.

The following is part of a thought-provoking article by Justin Gest at CNN.com:

During four years in office, President Donald Trump reduced immigration admissions in every way that American law makes possible without congressional approval -- cuttingrefugee numbers, deporting law-abiding members of American citizens' families and thenfinally halting all entry to the US amid the pandemic for a period before blocking the issuance of new green cards. In 2020, virtually zero migration was no longer just a thought experiment; it was, at least for a period of time, policy.

As the US government now grapples with a backlog of asylum-seekers and immigrants at the southern border, a team of economists, demographers and I modeled what America would be like if those earlier policies were to continue hereafter. Commissioned by the bipartisan immigration advocacy group FWD.us, our independent research used the most recent US Census and economic data to project the outcomes of a variety of different policy scenarios -- one that cuts immigration to zero as Trump effectively did in 2020; one that cuts immigration admissions in half; one that extends recent levels; one that increases recent levels by 50%; and one that doubles recent levels.

The general trend in our modeling is clear: the more immigrants, the merrier.

Perhaps more importantly though, we find that even recent levels of legal immigration -- the approximately 1 million people per year that the US has traditionally granted permanent residence over the last few decades -- are not enough for the country to maintain historic rates of productivity. It is only through increased immigration that the United States can achieve a sustainable working-age population, economic growth and a solvent Social Security system. . . .

According to our research, by 2060, the share of the population between 18 and 65 -- working-age -- is projected to be nearly 62% in the scenario that doubles the current annual number of immigrant admissions. If immigration is cut to zero, it would be less than 56%. While this difference may seem small, it significantly affects the balance between workers and the elderly -- who are less likely to work or contribute to the tax base, and more likely to draw on government benefits and services. Where there were only 25 elderly persons per 100 working-age people in 2018, by 2060, we can expect nearly 50 elderly persons per 100 working-age people in the case of zero net migration, but only 30 in the scenario involving doubled admissions.

The zero-immigration scenario predicts real GDP of only $32 trillion by 2060, more than 27% lower than if recent trends were to continue. Were Congress to maintain the current mix of visas but double annual admissions, the US would increase economic growth by over 40% relative to the scenario that extends 2018 baseline trends.

No doubt, the US needs an orderly system of migration management. But the young and industrious newcomers yearning to stabilize their lives and secure their survival are actually critical to our nation's survival, too. 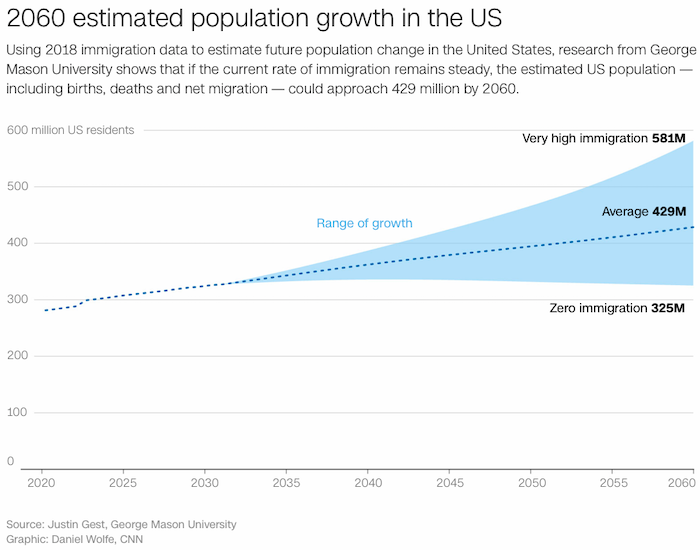 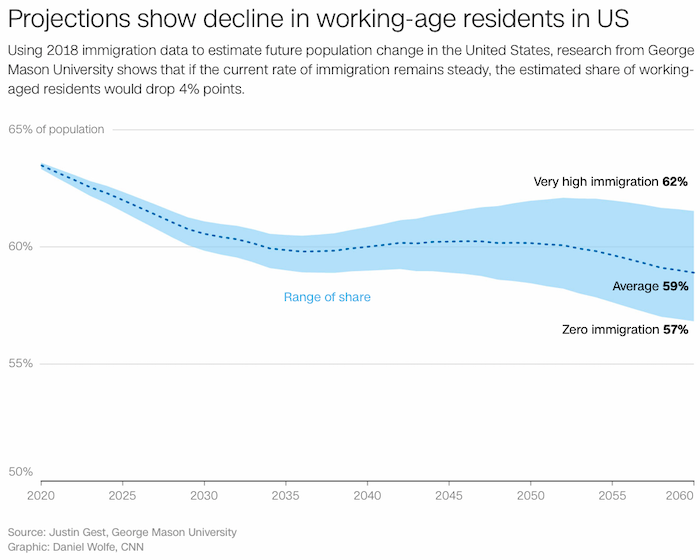