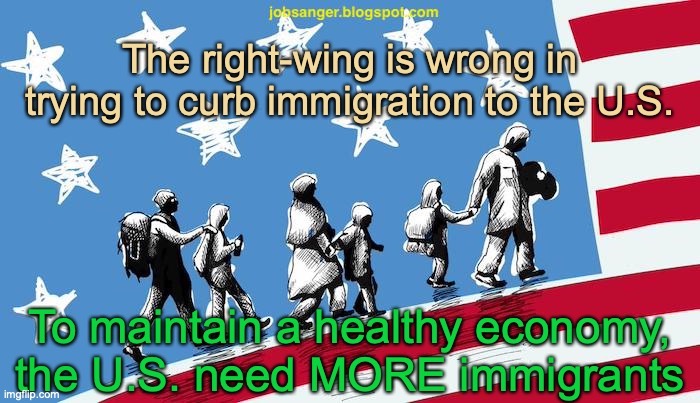 During his four years in office, Donald Trump demonized immigrants seeking a better life in this country. He painted both refugees and immigrants as criminals seeking to take jobs away from Americans, and many on the right happily accepted his mean-spirited words and actions.

Consider the following. It is part of a thought-provoking article by Nicole Narea at Vox.com:

The results of the 2020 census are a warning sign that America is on a course for slow population growth.

Economists broadly agree that population growth fuels economic growth in wealthy countries. But the recently released census figures show the US population was 331.5 million people, an increase of just 7.4 percent between 2010 and 2020 — the lowest rate since the 1930s. Projections suggest that, unless current trends change, those numbers could continue to diminish dramatically over the next two to three decades, with the population growing by just 78 million by 2060.

Some parts of the US are already beginning to experience some of the downsides of population slowdown or decline: Shrinking tax bases in rural areas have made it harder for government budgets to support essential services, such as infrastructure and public schools. As population growth slows, the pressure for cuts will likely grow. Meanwhile, the existing population will continue to age; by 2030, the Census Bureau estimates that one in five US residents will be of retirement age. . . .

There are ways that policymakers can turn the situation around — the Biden administration has advocated for family-friendly policiesthat could make it easier for Americans to have more children. But that will not be enough to overcome a widening gap in the number of working-age adults that are able to support an aging population of baby boomers.

That leaves immigration, which has historically insulated the US from population decline and represents a kind of tap that the US can turn on and off. Over the next decade, it is set to become the primary driver of population growthfor the first time in US history. The question now is exactly how much more immigration might be needed to accelerate population growth — and whether US policymakers can actually overcome their political differences on the issue to make it an effective tool.

“Immigration is one of the most feasible and rational ways to help respond to this challenge and we know that it will have a really significant impact,” Danilo Zak, a senior policy and advocacy associate for the National Immigration Forum, said. . . .

Immigration is a much more reliable driver of population growth. The average age of newly arriving immigrants is 31, which is more than seven years younger than the median American, meaning that they could help replace an aging workforce. They are also more entrepreneurial, which encourages economic dynamism, and more likely to work in essential industries, such as health care, transportation, construction, agriculture, and food processing.

Refugees are also more likely to settle in less dense population centers where housing costs are lower, possibly reinvigorating the nearly 35 percent of rural counties in the US that have experienced significant population loss in recent decades.

Raising immigration levels wouldn’t necessarily require a major reimagining of the US immigration system, though that might offer more flexibility to reevaluate immigration levels periodically — it could be accomplished by just increasing the caps on existing forms of visas and green cards. . . .

To really reap the benefits of increased immigration, though, the US would have to ensure that immigrants have the ability to integrate, which it has done successfully in the past. Immigrants in the US already have a higher employment rate and labor participation rate than native-born citizens, and immigrant children tend to perform at or above the educational level of comparable US-born children. . . .

But Zak said that all those methods seem somewhat arbitrary and unlikely to spur members of Congress to action. In his research with the National Immigration Forum’s president and CEO, Ali Noorani, he argues that the US should increase net immigration levels by at least 37 percent, or about 370,000 additional immigrants a year, to prevent a “demographic deficit” stemming from low population growth.

That number of immigrants, they estimate, would maintain the current “Old Age Dependency Ratio” (OADR), which is the number of people ages 16 and 64 per person over age 65 — basically, the number of workers available to support one retired person. It’s generally considered to be a good indicator of the demographic health of a country.

Even just maintaining the US’s current ratio may not be enough to avert the problems associated with an aging population. But it provides a preliminary benchmark for members of Congress, who, in an ideal world, would reevaluate immigration levels every few years. . . .

Legal immigration can be used in tandem with programs to legalize the estimated 11 million undocumented immigrants already living in the US. Researchers from the Wharton School at the University of Pennsylvania found that the provisions in Biden’s comprehensive immigration reform proposal granting legal status to undocumented immigrants would increase the size of the US population by more than 4 percent by 2050. That’s because it would decrease their likelihood of emigrating and increase their birthrates.