Cruz's Big Lie: Critical Race Theory Is As Racist As The KKK 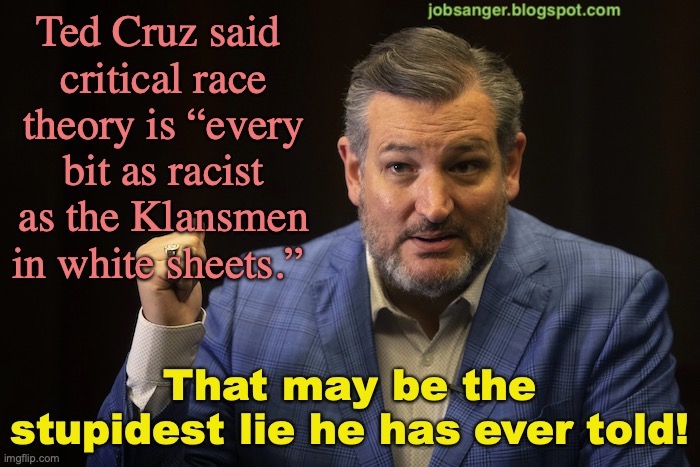 Republican right-wingers have recently bent over backwards trying to defend white supremacy and white privilege. But none has been as ridiculous in those contortions as Ted Cruz. The Texas senator might as well be trying to claim the sun rises in the west and sets in the east as his latest huge lie -- that critical race theory is as racist as the Ku Klux Klan! That should remove any doubt as to whether he is a racist and ignorant supporter of white supremacy.

Here is part of the response to Cruz's idiotic lie from Kevin M. Kruse at MSNBC.com:

At the conservative Faith and Freedom Forum this past week, Sen. Ted Cruz, R-Texas, launched an attack on critical race theory. Such rants have become a staple for Republicans lately, but Cruz set himself apart by asserting that the legal theory was “every bit as racist as the Klansmen in white sheets.”

To say this is nonsense feels painfully obvious. The Ku Klux Klan’s ideology began with the premise that racial differences were an obvious biological and scientific fact and that all human activities had to be organized around that fact; critical race theorists take as their starting point the belief that race is a fiction, that it’s an invented concept that has no basis in biology or science.

The Klan worked to put its racist beliefs into action through Jim Crow laws in the South and immigration restrictions for the nation as a whole; critical race theorists have devoted themselves to identifying the remainders of that racism in the law and rooting it out.

And, most obviously, the KKK was a terrorist organization responsible for decades of white supremacist violence that included thousands of murders, mutilations and bombings of African Americans and other minorities. The law school professors behind critical race theory are not.

Cruz offered no evidence for these claims, because there is none. Far from arguing that individual white people are all racist, critical race theorists assert that focusing on the actions of individuals is meaningless because racism is more deeply rooted in larger structural and systemic problems.

Rather than believing America is “irredeemably racist,” critical race theorists have stated that their reckoning with the submerged role of racism in America is a path to redeem the nation and fulfill the promises of emancipation and the 13th, 14th and 15th Amendments. Critical race theorists also do not seek to turn Americans against each other, but rather to help them understand the actual history of the nation they share as citizens.

While Cruz’s claim that critical race theorists are “every bit as racist” as Klansmen is laughable, it notably fits into a larger historical pattern in which white southerners asserted that the critics of white supremacy were just as bad — or worse — than the defenders of white supremacy.

During the civil rights era, segregationist leaders across the South complained that they were being besieged by “extremists on both sides,” by which they meant white supremacist organizations like the Ku Klux Klan and its white-collar counterpart, the White Citizens’ Councils, and civil rights organizations, like the National Association for the Advancement of Colored People (NAACP). . . .

Convincing ordinary Americans that the enemies of the Klan were just as bad as the Klan itself was, of course, the entire point. It still is.

This is a tried-and-true line of attack from those who wish to preserve the status quo, but in this instance it’s especially egregious. Critical race theorists seek to expose the ways in which white supremacists — like Long, the Louisiana state legislature, or Johnson — abused the powers of their offices to embed racist principles and policies in our political and legal systems.

It’s bad enough that Cruz slanders them. But it’s even worse that he uses the exact same line of argument against them that those segregationists did.