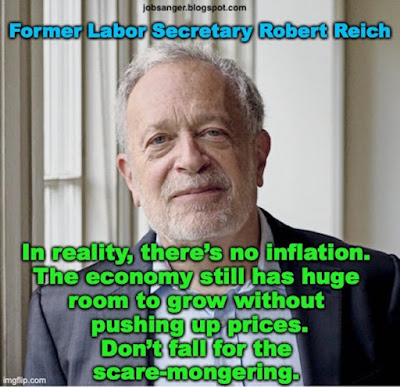 The Republicans in Congress are now trying to scare Americans over a recent rise in some prices. They want you to believe we are on the road to runaway inflation. And they want to use that to deny things that Americans need to climb out of this recession.

They are lying (as usual). Here is the truth from former Labor Secretary Robert Reich:

You’re hearing a lot about inflation these days. Don’t buy it. Every time the economy gets a bit of wind in its sails and workers get a little wage increase, conservatives scream about inflation and price increases.

In reality, there’s no inflation. The economy still has huge room to grow without pushing up prices. We’re still 7 million jobs short of where we were in January 2020. Retail and office space is empty. Factories aren’t near capacity.

In addition, companies can easily outsource extra production they need. Meanwhile, unions are so weak as to negate the possibility of wage-price inflation.

The price increases we’re witnessing now are because of supply bottlenecks, as supply catches up with pent-up demand.

To the extent we need to worry about anything, it’s industrial concentration. Too many US industries are dominated by a handful of corporations, which have the ability to push prices higher. That requires antitrust enforcement.

But inflation itself – structural, accelerating price increases – is a total mythology.

Don’t fall for the scare-mongering.