Democrats Are The Best Party For Economic Growth 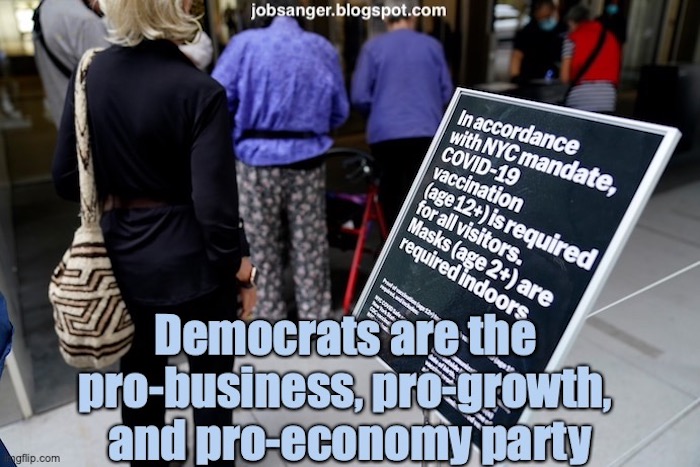 For decades, the Republicans have posed as the best party for economic growth. They still think that taking restraints and taxes off the rich and the corporations will benefit everyone. But that has never been true -- it just fattens the bank accounts of the rich and corporations, and nothing "trickles-down" to anyone else.

The truth is that the economy has always fared better under Democrats. And with the Republicans adding anti-mask and anti-vaccination policies to their failed economic policies, Democrats are not the only party that will grow the economy, helping both businesses and workers.

Here is how Catherine Rampell describes this reality in The Washington Post:

Thanks to President Biden’s vaccine mandate for employers — and the GOP’s response — Democrats have taken over the mantle of the pro-business, pro-economy, pro-growth party.

It is Democrats, after all, who have a plan to get the economy humming again, by controlling the coronavirus and thereby making it safe for Americans to work, shop, attend school and otherwise resume their pre-pandemic economic lives.

For the past decade, voters have usually said they trusted Republicans more than Democrats on the economy. This was a triumph of propaganda over experience, given how much better the economy has generally performed under Democratic presidents, on nearly every major metric — jobs, output growth, productivity, stock prices. To be fair, Democrats’ superior economic record to date has been primarily due to luck. But right now, Democrats deserve Americans’ economic faith because they are the only — yes, only — party actively working to help the economy recover from covid-19.

For a year and a half now, the virus has been in charge of the economy. Getting employment and other key metrics back on track requires curbing the virus’s spread. Under Biden’s leadership, Democrats have pleaded with Americans to voluntarily undertake the cheapest, most effective measure available for accomplishing this: getting vaccinated. Democrats have also urged adoption of other relatively inexpensive interventions, such as wearing masks in high-risk settings. These measures would relieve pressure on hospitals, help schools remain open (allowing parents to work), and generally make it safer and more attractive to engage in normal economic activities.

Republican politicians, however, have mostly opposed these common-sense policies.

Some have actively discouraged people from getting vaccinated, amplifiedconspiracy theories, and (in places including Florida and Texas) obstructed private companies from taking measures to reduce the spread of covid-19 within their own workplaces. These efforts, coupled with the spread of the more transmissible delta variant, have led to increasedhospitalizations and deaths and slower job growth. . . .

Last week, Biden announced more aggressive actions to control the spread, including greater availability of covid-19 tests and vaccination mandates for federal workers. The most controversial measure affected the private sector: a forthcoming requirement for companies with at least 100 employees to ensure their workers are either vaccinated or tested weekly if they return to the workplace.

Republican politicians around the country have adopted a pro-covid-19, anti-economy response. . . .

Why might companies welcome a government order that ties their hands? Because they know they’re better off if their workers, and the public more broadly, are vaccinated.

Higher vaccination rates reduce the risk of interruptions to operations and make customers feel safer. Imposing mandates unilaterally is perilous, though, because Republicans have turned it into a culture-war issue. Given labor shortages and the highly combustible political environment, employers (understandably) fear losing anti-vax workers to competitors.

Public support for employer vaccination mandates has generally been rising, perhaps changing the risk calculus for some firms — but not enough of them, and not fast enough. That’s why it’s helpful for the government to step in and play bad cop. . . .

Increasing vaccination is the best, cheapest way to save lives and stimulate the economy. If Republicans won’t get on board with this pro-growth policy, the least they can do is get out of the way.