McConnell "Blinks" - But He Remains On The Hot Seat 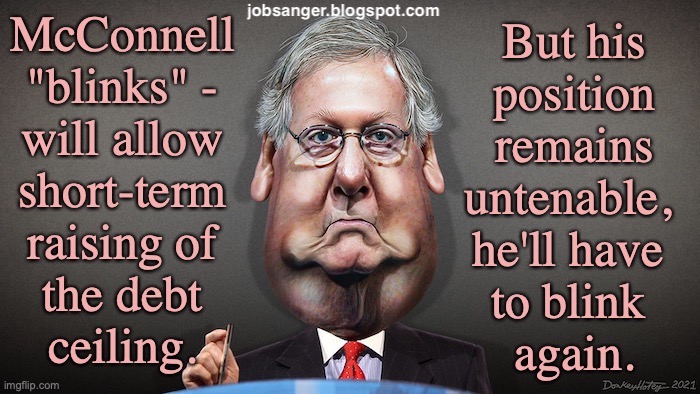 It looks like the debt ceiling fight is over -- for now. Afraid that he and his party would be blamed for a default if they continued to filibuster raising the debt limit, Minority Leader McConnell agreed to stop the filibuster and allow Democrats to raise the debt ceiling for nearly two months. But the fight is not over. The same thing is going to be repeated near the first of December.

McConnell wants Democrats to raise the ceiling using the reconciliation process, and says the short delay will give them time to do that. He could then tell voters that Republicans tried to stop the Democrats, but failed to curb their spending. It would be a lie, but that's what he wants.

But Democrats are not interested in playing his silly game. They have no intention of using reconciliation to raise the debt ceiling. They will dare the GOP to repeat its obstruction in December.

And the position held by McConnell and the Republicans is untenable. They cannot force Democrats to use reconciliation -- and if they block raising the debt ceiling and cause a default, they will be the ones to blame. The public will see it was the Republicans who voted for default, and the Democrats who voted against it.

McConnell will have to "blink" again in December. The normally Republican business community will force him to do so.