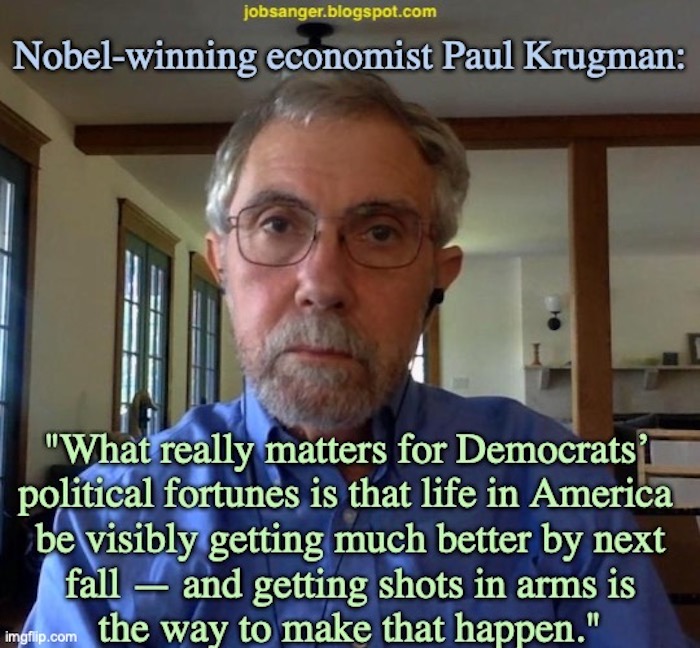 Right-wingers are howling that President Biden's vaccine mandates are a violation of personal rights. As usual, they are wrong! The mandates are necessary to end the pandemic and improve the economy -- and THEY WORK!

The following is part of a column on this by Paul Krugman in The New York Times:

Three weeks ago President Biden announced plans to require Covid-19 vaccinations — or, in some cases, weekly testing as an alternative — for most U.S. workers. There were immediate predictions that the move would backfire, that it would only stiffen vaccine resistance. Indeed, some surveys suggested that as many as half of unvaccinated workers would quit their jobs rather than take their shots.

But such threats are proving mostly empty. Many state and local governments and a significant number of private employers have already imposed vaccine mandates — and these mandates have been very successful. Compliance has been high, and only a relative handful of workers have quit or had to be fired.

To understand why vaccine mandates seem to work so well, we need to think about the real nature of vaccine resistance. Most of the people refusing to take their shots don’t really believe that the vaccines contain tracking microchips or that they have severe side effects.

Instead, everything we’ve seen suggests that many vaccine resisters are like the people who in the past raged about seatbelt laws and bans on phosphates in detergents, or more recently refused to wear masks. That is, they’re people who balk at being asked to accept what they imagine to be a cost or inconvenience on behalf of the public good. . . .

The point is that most vaccine resistance isn’t about deep concerns, but it often involves assertions of the right to give (misguided perceptions of) self-interest priority over the public interest. So, luckily, many resisters fold as soon as the calculus of self-interest reverses, and refusing to take their shots has immediate, tangible financial costs. . . .

But why have so many Republicans refused to take their shots? Some, of course, have bought into the wild claims about side effects and sinister conspiracies that circulate on social media. But they’re probably a small minority.

Almost surely, mainstream right-wing media outlets, especially Fox News, have played a much bigger role. These outlets generally steer away from clearly falsifiable assertions — they have to worry about lawsuits. But they nonetheless want to do all they can to undermine the Biden administration, so they have done their best to raise doubts about the vaccines’ safety and effectiveness.

The effect has been to encourage many Republicans to think of getting vaccinated as an imposition, a cost they’re being asked to bear rather than a benefit they’re being offered — and, of course, something they’re primed to oppose precisely because it’s something Democrats want to see happen. Medical experts may say that going unvaccinated greatly increases your risk of getting seriously ill or dying, but hey, what do they know?

As I said, there probably aren’t very many Americans, even among self-identified Republicans, who really believe the vaccine horror stories — or are willing to make large, visible personal sacrifices in the name of “freedom.” So as soon as the cost of going unvaccinated stops being about statistics and becomes concrete — refuse the shot, lose your job — most vaccine resistance evaporates.

All of this has a clear policy implication for the Biden administration and for other leaders like governors and mayors — namely, full speed ahead. Vaccine mandates won’t cause mass resignations; they will cause a sharp rise in vaccination rates, which is key both to finally getting Covid under control and to achieving sustained economic recovery.

And Democrats shouldn’t fear the political fallout. Almost nobody will vote Republican because they’re enraged by public health rules, since such people are most likely to vote Republican anyway. What really matters for Democrats’ political fortunes is that life in America be visibly getting much better by next fall — and getting shots in arms is the way to make that happen.