Medical Quack To Run For GOP Senate Nomination In Pa. 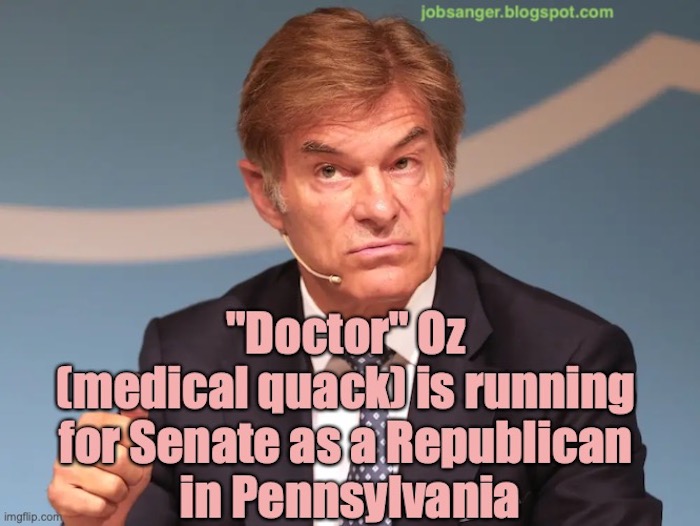 Trump's favorite candidate for the Senate in Pennsylvania (Sean Parnell) has dropped out of the race after being accused of wife-beating. But have no fear. The GOP has someone just as bad to replace him. Medical quack, Dr. Oz, has tossed his hat in the ring.

Here's how Ja'han Jones at MSNBC.com describes it:

Mehmet Oz, known as “Dr. Oz” to the daytime television talk show crowd, entered the Republican primary for Senate in Pennsylvaniaon Tuesday — and there’s no better time for me to remind you how much of a quack he is.

Oz, who is reportedly a longtime New Jersey resident, announced his bid after another Republican in the race, Sean Parnell, suspended his campaign last week. Parnell, who received former President Donald Trump’s endorsement in September, dropped out of the race after his estranged wife accused him of abusing her and their children.

Oz must have seen that as his calling, as he’s now among several candidates vying to win the GOP primary and face off against the leading Democrat for the Senate seat being vacated by two-term Republican Pat Toomey.

In the Washington Examiner op-ed announcing his candidacy, Oz tried to pitch himself as a trustworthy medical authority to the Republican base by regurgitating conservative talking points promising “freedom” from Covid-19 safety protocols. The doctor’s candidacy, according to his op-ed, is premised on his pandemic response proposals. (Spoiler alert: They’re terrible.)

“The arrogant, closed-minded people in charge closed our parks, shuttered our schools, shut down our businesses, and took away our freedom,” Oz wrote, adding, “Doctors are trained to tell it like it is because you deserve to hear our best advice and make your own decisions. It’s why I have fought the establishment my whole career.”

But Oz, a frequent Fox News guest, has been widely discredited for his health claims about Covid and other matters. His candidacy and popular punditry is just the latest sign — in fact, a perfect symbol — of the Republican Party’s embrace of misinformation and its obsession with made-for-TV figures, especially old ones who appear between catheter commercials on Fox News.

I invite you to check out this nonexhaustive list from Business Insider that includes some of the most outlandish, baseless and false claims Oz has made during his time as a TV host. He’s frequently pitched unproven concoctions as miracle solutions for all sorts of maladies, and he’s been called to Congress to answer for his false claims.

Just last year, he called for schools to reopen because doing so might “only cost us 2 to 3 percent, in terms of total mortality.” His disregard for life earned so much backlash that he apologized soon after making the comments.

Oz is a danger to public health who spreads his pseudoscientific theories far and wide. In that sense, he’s the perfect candidate for a Republican Party that’s just as enthralled by medical disinformation as he is.