Sinema Is Censured By The Arizona Democratic Party 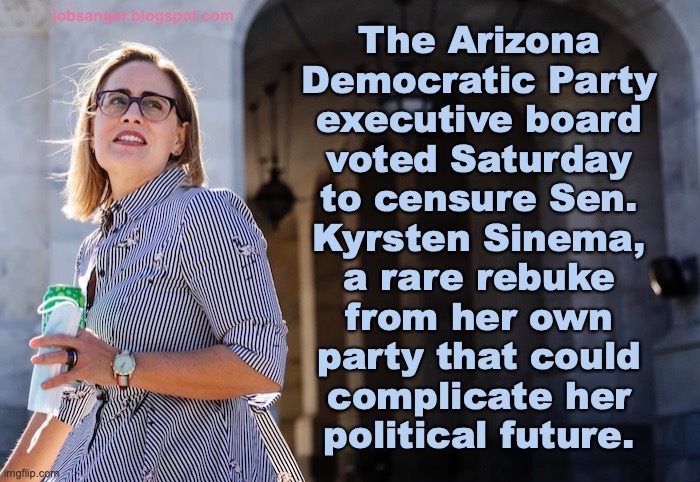 Senator Krysten Sinema has been censured by the executive board of the Arizona Democratic Party.

They took the unusual move because of her vote to defend the 60-vote filibuster. Her vote effectively killed the Voting Rights Bill in the U.S. Senate. And it also means that no bill proposed and supported by Democrats can pass the Senate -- not the Voting Rights Bill, the Build Back Better Bill, or anything else. She has effectively given the Republicans the power to prevent any Democratic bill.

She is not up for re-election until 2024. That gives her time to rehabilitate her image among Democrats. And she needs to do that, because she is very unpopular with Democrats -- both in Arizona and across the nation.

I doubt she will even try though. She seems to be enjoying the notoriety that comes with being the "Republican" voice in the Democratic caucus. It feeds her ego, and makes her feel important.

But this narcissistic ego-inflation comes at a price. If she continues down this road, Arizona Democrats will find a suitable opponent for her in 2024, and Democrats across the country will help fund that replacement. There is a very good chance she would be defeated -- and she would deserve it!