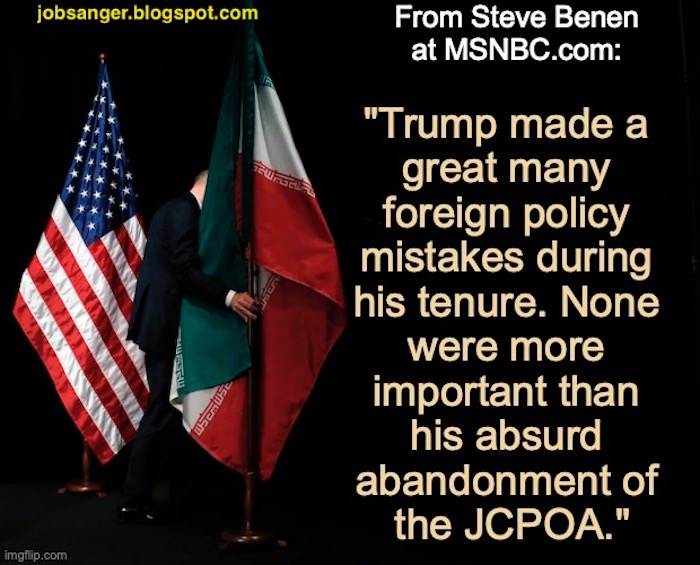 The following post is part of an op-ed by Steve Benen at MSNBC.com on the biggest foreign policy mistake made by Donald Trump:

The Iran deal did exactly what it set out to do: The agreement dramatically curtailed Tehran's nuclear ambitions and established a rigorous system of monitoring and verification. Once the policy took effect, each of the parties agreed that the participants were holding up their end of the bargain, and Iran's nuclear program was, at the time, on indefinite hold.

And then Trump took office.

One of my favorite stories about the Iran deal came a few months into Trump's term, when the then-president held a lengthy White House meeting with top members of his national security team. Each of the officials told Trump the same thing: It was in the United States' interest to preserve the existing JCPOA policy.

The Republican expected his team to tell him how to get out of the international agreement, not how to stick with it. When his own foreign policy and national security advisers told him the policy was working, Trump "had a bit of a meltdown."

Soon after, he abandoned the deal anyway, not because it was failing, but because Trump was indifferent to its success. The effective policy was soon replaced by a new strategy known as the "maximum pressure" campaign.

Among the results is a new perspective among former JCPOA critics. It's no secret that Israeli officials were among the fiercest opponents of the Iran deal, but Axios reported two weeks ago that the head of Israeli military intelligence told ministers during a Security Cabinet meeting "that Israel will be better off if the Iran nuclear talks lead to a deal rather than collapsing without one."

There are plenty of other notable voices in Jerusalem delivering the same message.

In Republican circles, it's simply assumed that the Obama-era Iran deal "failed." That gets reality backwards: The real failure is the policy Trump tried to implement, not the policy he replaced.

Restoring what worked may prove impossible, but there should be no question as to who's responsible for our current predicament. Trump made a great many foreign policy mistakes during his tenure, many of them driven by little more than petty ignorance. None were more important than his absurd abandonment of the JCPOA.